Man On A Ledge

Good morning everyone.  It's not often that I write at 2:00 in the morning and rip off the title of the movie that I'm watching to use as the title of my blog post.  It's pretty amazing that my little blog is closing in on 100,000 total views considering that I haven't posted an entry in almost a month.  My lack of writing hasn't been due to watching an abundance of movies in the wee hours of the morning, in case you're wondering.  Since I've returned to the White Mountains, it's very rare for me to stay up this late.  And then when I start thinking about how late I used to routinely stay awake, and then I consider time zone differences...  For example, if I go to bed at midnight now, and then stop to realize that that's 9:00 p.m. in Las Vegas, when the night is just about to begin for thousands of people.

So what have I been up to?  Basketball has been my big social event of the winter.  Lots and lots of Littleton Crusaders girls and boys basketball.  The girls team at my alma mater had an outstanding season, going all the way to the state final, where they were only beaten by four points.  On the boys side, a layup with only three seconds remaining in the game gave our hometown Crusaders an undefeated season and rewarded the boys team with their first state title since 1990.  This is worth 1,000 words... 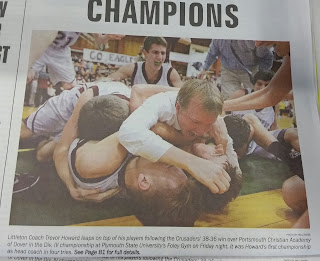 That photo comes to you courtesy of the White Mountain Record.  Congratulations to both the boys and girls at my alma mater on their outstanding seasons!

So that brings us to the current basketball, which is the Men's NCAA Tourney.  Now for someone who was on the bench for a lot of high school girls basketball games, I'm not going to say that I haven't been watching any NCAA women's action this year, but I just found out yesterday that the women had gone to playing four quarters this season (instead of a pair of 20-minute halves).  ANYWAY, back to the hoops that I will be watching over the next couple of weeks.  My friend Joey and my brother Pete have joined me once again at Coach's Parlay Card to give you our favorite bets on the ongoing tourney action.  If you wanna stop by there later today or early Thursday morning, we'll each have our favorite bets up for the 'Sweet 16.'  I don't know if it has anything to do with both Joey and Pete working in Vegas sportsbooks, but they both went 3-2 on their bets last week, while I went 1-4...  :)