Good morning everyone.  It's 3:30 in the morning (I bet you already guessed that) and I shouldn't be awake right now, but I went to bed at like 8-something and I'm awake, so here I am.  I just changed my Facebook and Twitter cover and profile photos and couldn't think of any other ways to kill time, soooo again, here I am...  : )  It appears that it's been just over a month since I last typed for you (the dedicated blogger that I am), so you are in for the extra treat that this post was completely unplanned, and there is no script or notes (which is pretty much the definition of completely unplanned)...

Let me start off by saying that it's hard to believe that it's just over a week until Thanksgiving.  In case you're wondering (because I'm sure you are), your NFL lineup on Turkey Day features Bears @ Lions, followed by Redskins @ Cowboys, with Falcons @ Saints for the nightcap.  Thanksgiving is on the 22nd this year, which seems a bit early, but my calendar says so, and my calendar is usually pretty trustworthy.  Today marks one month since I turned 50 years old, and time still doesn't appear to be slowing down at all.  We're already at the point in the college football season where the major conferences are on the verge of hosting their championship games, and the bowl season will start in just over a month.  If my math is correct, 42 days from today will be Christmas Eve, which means that 2019 is about 50 days away...  #wheeeeeeeee

In one of the major upsets of all time, I still haven't played any poker since moving to the Mississippi Gulf Coast.  Off the top of my head, I can't remember the last time that I did sit at a poker table, and my best guess was that it happened in late July or early August.  In all honesty, I normally do play less poker during football season, and this fall I moved across the country and started a new job on top of it.  I do have three poker rooms to choose from here in Biloxi, and they're all in the vicinity of about a mile from where I live.  #locationlocationlocation  Just this week, I actually subscribed to Card Player Magazine, which costs about $40.00 a year in the United States, in case any of you are interested.  I was picking them up at the Bellagio in Las Vegas for no charge, but none of the rooms here seem to carry them.  Similar to Las Vegas, the predominant games in the poker rooms here are 1/2, 1/3 and 2/5 no-limit, and 4-8 limit.  The casinos with rooms here are the Beau Rivage (MGM), the Imperial Palace (not Caesar's affiliated), and the Golden Nugget.  I'm sure that I'll eventually stumble into one of the poker rooms here, and I'll bore you to death with the details when I do.

We've had a light but steady rain here for a while now, but it's only rained a handful of times since the beginning of September.  Ha.  That's in contrast to the month of August, when it seemingly rained every day, and I believed that water falling from the sky was the only weather that Biloxi ever got. 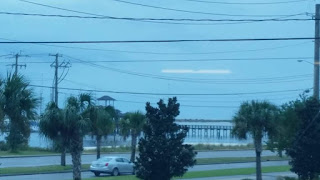 I innocently snapped and posted this photo during lunch yesterday, and as my break progressed, dark clouds slowly but surely rolled in from the west (the direction that we're facing here).  By the time I returned to work, it was raining, and it continued for pretty much the rest of the day.  The rain was so prevalent in August that I've brought an umbrella to work with me every single day since I purchased it.  I purchased the umbrella after arriving here in Mississippi.  It rained so infrequently when I lived in Las Vegas that I didn't even own an umbrella in the desert.  : )  Neither here nor there, but this is my view at lunch every day, this shot having been taken from my seat in the employee dining room.  : D  Speaking of weather, the temperatures took a quick dip down into the 40's recently, which prompted me to search for my gloves.  I thought this was a bit early to be chilly, but I noticed yesterday during lunch that Las Vegas is under a freeze warning tonight, so I guess that Thanksgiving and Christmas really are approaching fast.

I'm gonna let you go for now and get a few more hours of sleep before I get ready for work (I seriously fell asleep at like 9:00 last night).  Have a great week and MAYBE I'll see y'all again before Thanksgiving...  : )
Posted by ~Coach at 4:05 AM No comments: