A Fleury Of Activity

Good morning everyone.  Here I am again, writing when you least expect it.  It's pathetic how little I've written recently, considering how busy I expect to be over the next two months, but let's get started.  Las Vegas had the pleasure of hosting the honeymoon of my sister and her husband recently, and although Whitney and T.C. weren't in town very long, they got their money's worth.  Catching a show featuring one of her former students at the Flamingo, a picture with the iconic Las Vegas sign, a 24-hour Caesar's buffet pass, a stroll down The Linq Promenade, and this visit to Beer Park at Paris are among the boxes they checked in their whirlwind visit to the desert...  (Coach pictured far left, happy couple lined up on the right...  :) ) 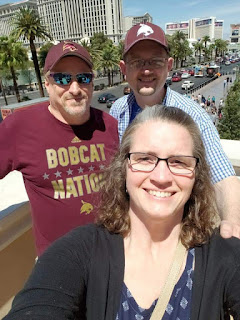 I should also mention the three hundred dollars that Whitney won in less than an hour playing three card poker while T.C. and myself were checking out the Flamingo's poker room...  :)  Knowing my love for all things Texas State (and, by the way, we're all Bobcats), T.C. and Whitney sent me a nice gift which I received recently....  :D 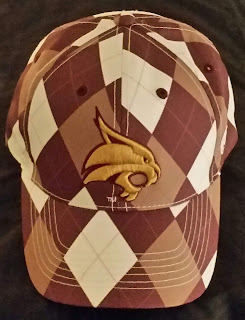 It was great catching up with the happy couple, especially since it was their first trip to Las Vegas, and hopefully they'll make many more in the future...  Speaking of trips to Las Vegas, it was exactly two years ago today that I returned to the desert.  After leaving northern New Hampshire at 5:00 p.m. on Friday afternoon, followed by one Saturday overnight stay in Des Moines, Iowa, I pulled up to my brother's house at 7:20 a.m. on Monday monring.  Yes, I was a driving machine...  :)  After Carmen and Pete were kind enough to put me up for about a month while I resettled in the desert (found a place to live, applied for jobs, etc...), I'm happy to say that I've been working for Caesar's Entertainment for going on two years now.

With my feet back firmly underneath me, I'm looking forward to a summer filled with poker.  We're a couple of days from Memorial Day Weekend, which means that Las Vegas will be crawling with poker players for the next two months, with the World Series of Poker returning to the Rio early next week.  I'm estimating (conservatively) that I'll play 20-25 times over the next eight weeks.

In my last month of non-writing, I haven't told y'all the story of one of my most recent excursions to the poker tables, where I ended up costing myself about 175 dollars.  I was playing 1/2 no-limit at the Flamingo, and in early position, I folded pocket 3's to a raise of 11.  I believe that four players went to the flop for 11 each, and the flop came... 9 3 3....  So as I pondered the quad three's that I folded, I watched three players check, followed by a bet of 60.  The three checkers (including the pre-flop raiser) proceeded to fold, leaving me to assess the damage.  Excluding the casino's take (the rake and jackpot drops), I lost 44 dollars (11 x 4) from the money put in before the flop.  Then I lost the 60 bet after the flop, plus the 30ish I'm assuming I would have won from that same bettor when I eventually got all of my chips in.  I only had about 90 when the hand started.  I also would have won a 50 dollar bonus from the casino for hitting four-of-a-kind.  So yeah, I lost about 175 dollars for folding quads.  WHEEEEEEE.......

Back to the present, one of my friends and former athletes has a fight coming up Friday night in Dallas for anyone who might be spending Memorial Day Weekend up in the Metroplex. 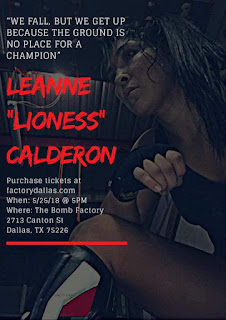 That's a pretty cool photo of Leanne (sorry, the Lioness) if I say so myself.  :)  Have a great fight Leanne!  Poker, UFC, and....  hockey???  Yes, there's a new hockey team in town, and if you haven't heard yet, the expansion Vegas Golden Knights are headed to the... STANLEY CUP FINAL...  Anchored between the pipes by Marc-Andre Fleury, the fledgling Knights have defied all odds, and will begin playing for the Stanley Cup on Monday... 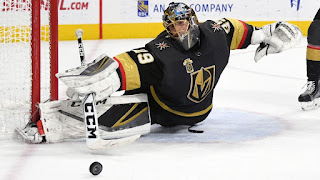 In the midst of all of this excitement, I will also be heading over to Brooklyn Bowl in the middle of June for a Blue October concert.  Fun times in the desert...  :)  Have a great summer and MAYBE I'll write again sometime before football season...  :D
Posted by ~Coach at 6:53 AM No comments: