Good afternoon everyone.  This is a very strange time for me to be writing a blog entry, as it's an hour before I have to start getting ready for work on a Saturday, but I woke up early, and I'm wide awake with an hour to kill...  :)  Let's get started...  ;)  I started playing poker again on a consistent basis very recently, and I've purchased some more "gear" to bring to the tables with me.  For those of you who may not know me as well as others, I have lived more of my life in San Marcos, Texas than in any other single place.  San Marcos is a rapidly growing city located right in between Austin and San Antonio.  I was introduced to San Marcos when I enrolled at Southwest Texas State University.  SWT had about 20,000 students when I entered as a freshman, and now 'Texas State' has almost 40,000 students.  In addition to my several years in school as a Bobcat (B.B.A., return for a teaching certificate, etc...), I also taught and coached high school for four years in San Marcos.  Additionally, I lived in San Marcos, America for several additional years.  'Bikini Hill' is the nickname for a stretch of grass by the river where students commonly tan on the Texas State campus, in case you were confused about the blog's namesake...  :)  For a while now, I've been wearing some sort of Texas State gear when I play poker, because when you're living in Las Vegas, it's very rare to see any Bobcats.  Texas State's maroon and gold is a very unique item here in the desert, and it stands out to fellow Texans.

When I was playing poker a few weeks ago, a woman at my table was using a card protector that had a spider on it.  This protector was basically a ceramic collectible or miniature with a spider on a rock, about the height and width of a quarter.  As players at the table chatted about it, I guess that the little thing crawled inside my head, because later the thought suddenly occurred to me.  RATTLESNAKE!!!!  For a while now, I've simply been using a poker chip to protect my cards (if some sort of object is covering your cards, the dealer is less likely to kill your hand by mistake), but then I thought, how awesome would it be to find a rattler to guard my hands.  The mascot of the high school in San Marcos is the Rattlers, if that helps bring you up to speed.  :)  In addition to my Texas State gear (which now includes eight t-shirts and a football jersey), I have my newly acquired collection of three rattlesnakes to help me represent San Marcos at the poker tables.  These are my new card protectors and my most recent shipment of clothing from San Marcos... 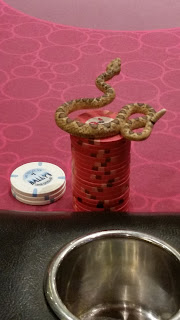 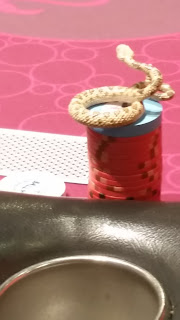 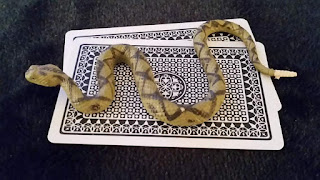 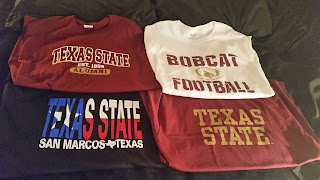 As I said, I've been wearing my Texas State clothing to the tables for a while, so much so that when I wore my Steelers jersey to play poker after we clinched the division title, a poker dealer at the Flamingo commented, "no Bobcats shirt today?"  :)  As for the rattlesnakes, I can't recall anyone using any sort of snake as a card protector in all the time that I've been playing poker, and let me tell you, they are QUITE the conversation starter...  :)  Some people have very strong feelings about snakes, especially when you add fangs and a rattle to them.  The very first time I sat down with one, the guy to my left didn't say anything, but just looked at the snake curious and wide-eyed.  Another time, a player lifted the rattler from my cards for a second, and then proceeded to lose over 100 dollars pretty quickly.  The rodeo is currently taking place in Vegas, and a cowgirl from California had a visceral reaction to my rattlesnake, explaining how she's killed 28 of them on her property.  In another instance, a dealer picked up my rattler, and then proceeded to deal me my first winning hand in hours.  And yeah, I've only been playing with the snakes for about a week...  :D

It appears that I have to get ready for work now, but I'm sure I'll have more stories for you in the future.  Have a great weekend, and I'll see you soon!
Posted by ~Coach at 2:50 PM No comments:

Good morning everyone.  I saw on the poker calendar a few weeks back that the $10,400 main event of the WPT's Five Diamond Classic at the Bellagio was set to begin on Tuesday, so I notified my brother Pete, and we decided that it would be a good day to belatedly celebrate our birthdays.  After getting out the calculator, I figured out that this is the 14th anniversary of Pete bringing me to my first Five Diamond Classic.  I had never lived in Las Vegas or played poker in a casino at that point in time (heck, I had barely played or watched ANY poker up to that point).  As we headed to the Mirage to play some poker ourselves, I remember asking Pete if a straight beats a flush, and after TORCHING $337.00 in about six hours in a 3-6 limit hold 'em game, I was HOOKED....  :)  Tuesday cost me a little less, as we watched the professionals play for free (free for us) after we had lunch at the Planet Hollywood buffet.  When Pete and I arrived at the Bellagio, there was a substantial line of players waiting to enter the tournament, and most of them would become alternates as the tables in the Bellagio's poker room were the only ones being used for this event. 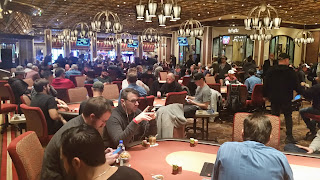 Bigger poker tournaments are often held in areas outside of a casino's normal poker room.  We arrived at 12:15 p.m., but instead of being 15 minutes late, we actually showed up a little early, and got to see Richard Seymour in his pregame routine.  For you poker people, we recognized several well-known players on Tuesday, including defending champion James Romero (he cashed for 1.9 million last year), Mike Sexton, Tony Dunst, Ben Lamb, Noah Schwartz, Freddy Deeb, Allen Cunningham, Andrew Lichtenberger, David Williams, and an attractive female player that busted when she ran her flush into a bigger flush.  No worries, she hopped right back into line to buy in again for another $10,400...  Pictured below is former NFL player Richard Seymour... 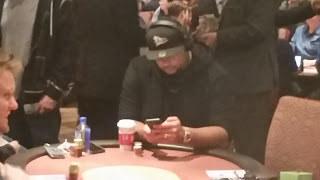 And this picture is my first plate of food at Planet Hollywood...  :D 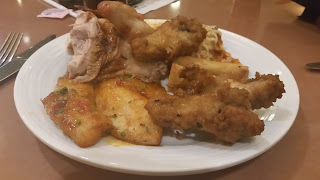 After Pete left, I ventured over to the Flamingo to watch my friends Errol and Mike play a little bit of poker in cash games.  I had planned on playing myself, but I suddenly remembered that I had been awake since 6:00 a.m. and was completely exhausted.  After Mike completely blew by me without recognizing me, Errol won a nice pot when he turned a full house before his opponent rivered a flush (yes, fourteen years later, and I now know that a full house beats a flush)...  ;)  I returned to the Flamingo last night and won $29.00 in an hour in a 2-4 limit game when I flopped a set of 5's against an opponent's two-pair on a K 9 5 flop.  I'm preparing to play a lot more 1/2 no-limit soon, but I'll gladly accept a wage of $29.00 an hour playing poker any day.

Things are going to change a bit for me at work now as the college football season ("regualr season") has ended, meaning that there won't be football from very early to closing now on Saturdays, and I'll also leave work an hour earlier on Friday nights, which naturally means more time for playing poker.  :P  I also anticipate having more time to write, so cross your fingers...  For the second post in a row, I'm stealing a little something from my friend Ali, as she took a great shot of some desert Christmas trees...  :) 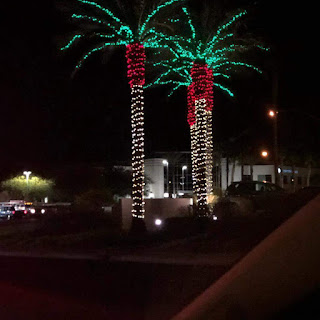 Enjoy your holiday season until next time, and I'll see you soon!