Good morning everyone.  This is the tail end of my last day off from work before the football season begins, so I'm psyched to say the least.  My friend Joey, my brother Pete, and myself will once again be sharing our favorite weekly football bets in cyberspace on my blog Coach's Parlay Card.  This promises to be a big weekend in Las Vegas as the McGregor/Mayweather fight takes place here Saturday night.  The onset of fall will be bringing cooler temperatures in addition to the kickoff of football, and this pleases me to no end.  The older I get, the less thrilled I've become with triple-digit temperatures.  The forecast high of 108 degrees on Monday will probably be the hottest day that Las Vegas see for the rest of 2017.  The combo of the fight/football/cooler temperatures should also bring some more poker players back to town.  After the World Series of Poker ends each summer, the poker scene in the desert is a bit more quiet before football returns.  Last night after my "Friday" shift ended at work, I felt the urge to play (I hadn't played poker for about a month), and I was pleased to find that the Flamingo had several tables going.  There was enough action going on that I was able to get my feet wet again for five hours at a 2-4 limit table, and after being down somewhere in the neighborhood of 50 bucks at my lowest, I flopped a set of 6's in a multi-way pot (like 8 players saw the flop, with a preflop raise), and even after I raised to 8 on the turn, I still had two players around to call my river bet, and I scooped a pretty nice pot.  Long story short, I won 33 bucks for my five hours of blood, sweat, and tears, in addition for the 5 comp dollars of course.  Anyway, after my month-long poker hiatus (which afforded me more time to study for the upcoming football season), I should be making numerous appearances in local poker rooms in the near future.

Outer space.  Since we recently got to experience an eclipse firsthand (except for a nameless person that was taking a nap in cloudy Las Vegas during the festivities), I'll share some photos with you that my friends on Facebook shared with me.  Hang onto your hats though, because these photos are not the reason for the title of this blog entry.  My friends Michelle, Kristi, Sydney, Courtney, and Wes were busy sharing these photos from across the U.S.A. a few days ago... 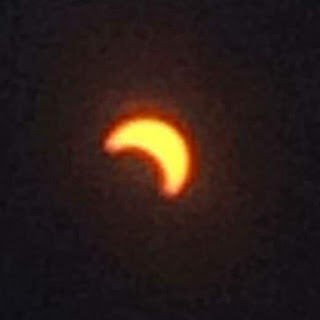 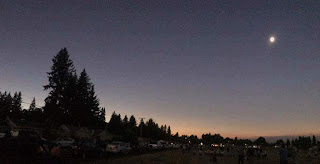 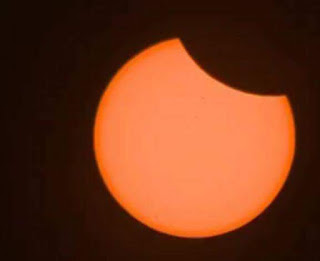 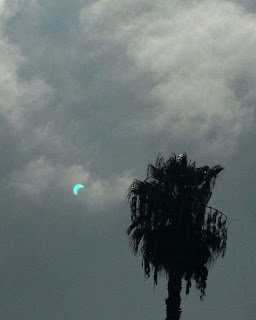 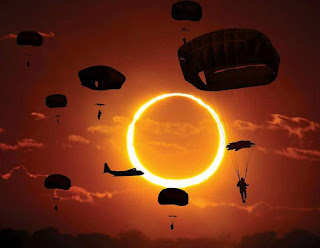 Now I won't go to the trouble of buying special glasses (or even staying awake for the eclipse for that matter), but I'm more than happy to steal some pictures from my friends...  Thanks y'all, great work!  ;)

Outer space...  So my friend Kimberly traveled to Area 51 recently to compete in a run (I believe it was a 10K, but I won't promise you that). Anyway, Kimberly is posting Facebook statuses about the big event, and in the comments section to a status, Kimberly says (I'm paraphrasing) that the course runs along the perimeter of Area 51.  Something instantly clicks in my head, and I think that I'm about to win the internet for that day.  I immediately reply to Kimberly's comment:  "So you're saying that the course is in the outer space of Area 51?"  Think about it, think about it, think.......  BRILLIANT, right?  The "outer space" of Area 51?  Aliens..., OUTER SPACE..  I think that I'm going to get this HUGE 'LOL,' and win some award from Facebook for being clever (probably presented by Mark Zuckerberg himself).  I brace myself for Kimberly's sheer delight and gratitude, and the powerful response that I receive...  "Yes."  ***Crickets***  I was so crushed that I was telling the story at work, and now I'm sharing it here with you...  :)

On a more serious note, I'm hoping for the best for all of my friends in Texas as Hurricane Harvey makes its way toward the Lone Star State.  On a lighter note, you have to love that someone in Corpus Christi was thinking of Selena (and the statue dedicated to her) when news of the imminent storm came.  Thanks to my friend Valerie for sharing this gem... 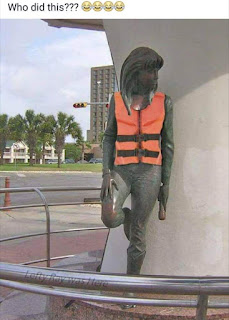 Good morning everyone.  Well it's been a little while since I've posted, and I just have excuses for you, and not good reasons, so let's get started...  :)  Although it's August in Las Vegas, the temperatures are finally starting to cool a little.  Okay, let me take back the word "cool."  We still have triple digits here, but earlier in the summer, the highs were around 115, and we don't have 110 degrees in the ten-day forecast...  :)  Today's forecast high is 96 degrees, and 106 is the highest expected temperature over the next ten days.  Tonight's low is supposed to dip down to 80, which is also the expected low ten days from now.  I think that you get my drift by now - it was warmer in the desert earlier this summer.  Thanks to Facebook, I recently realized that I've had the same mindset at this time of year for at least the better part of a decade.  I've lived in hot climates, and I've been counting down the minutes until the start of football season and the accompanying cooler weather.  Yesterday when I was "supposed" to be writing this blog entry, I was ordering some football jerseys from various online retailers because I'm allowed to wear them at work during football season.  My one-year anniversary at work is three weeks from tomorrow, which falls on the date of the Mayweather/McGregor fight, and the first four college football games of the year.  Seems fitting...

My poker didn't go as well as I would have liked this summer, but when things weren't going well, I showed discipline by reducing my number of sessions and saving my bankroll for the impending football season.  As far as gambling is concerned, I wager far more on sports during football season than I do the rest of the year combined, EASILY...  I haven't played much poker since the World Series ended, and have instead focused my time on studying for the upcoming football season.  If you've heard the rumor that I was released an hour early from work one day last week, and proceeded to head to a sportsbook and make my first bets of the football season (in addition to putting more money into my online betting account), there's only about 100% truth to that story...

My brother and I had a pleasant surprise last week as a family member visited us here in the desert without any advanced warning.  Our stepmom Brenda came to Las Vegas with her friends and surprised me at work, and I was able to keep the secret that she was in town until she saw my brother at work a few days later.  Talking with Brenda, I found out who one of my mystery blog readers is, as my blog stats tell me that I get several visitors from Facebook, but the amount of 'likes' that I get on my Facebook blog "ads" never seem to match the traffic that I receive from the social media site.  We all had a good visit, as Brenda treated Pete's family and myself to Johnny Rockets, which is a place that I had never dined at before.  How many times in the history of history has someone gone wrong with a cheeseburger and french fries?  :)

Although the calendar says that we're only halfway through with summer, the start of the NFL preseason, coupled with the lower temperatures here in the Valley, have me reminiscing back to my youth, when I spent the waning summer days dreaming about the future, and "fishing for clouds," if you will.  My friend Vicki has a great photographic eye, and her daughter is already living a life that most people can only dream about (that's a whole other blog entry in itself), so I thought that I'd leave you with a little photo of a young girl fishing for clouds... 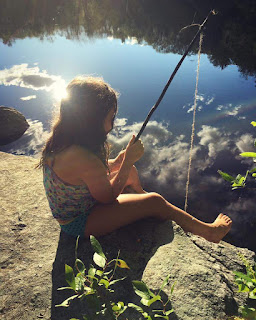