Good evening everyone.  I thought that I'd write again since I'm feeling a little more rested.  Twice in four days, I know - call Guinness...  I'm just watching a little 'Two and a Half Men' and 'The Big Bang Theory' and whatever else catches my eye until I fall asleep tonight.  This is the eve of classes starting on the University of Texas at Austin campus tomorrow, the proverbial "quiet before the storm" if you will...  This is what the trash dumpsters currently (this afternoon) look like at my apartment complex, if you need any proof that the students have returned to Austin... 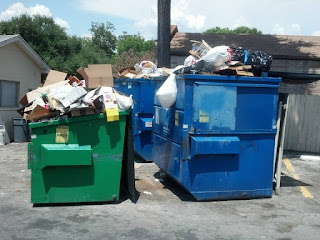 Photographs of trash.  And just when you thought that my blog couldn't possibly get any better...  Speaking of trash, I bet a little preseason football last night (the baby bets, thank goodness).  Last night I had bet on the Bengals (+3) and also wagered that Cincinnati would score over 18.5 points against Tampa Bay.  By the way, if any of you have ever competed at Fan Duel or Draft Kings, I'd like to get your feedback on those sites.  I've been seeing A LOT of commercials lately as the football season approaches...

Speaking of football, again, my friend Joey, my brother Pete, and myself will be giving you weekly football predictions at one of my other blogs, Coach's Parlay Card.  Regarding my picks, maybe this is where I should have inserted the photo of the trash...  ;)  Actually, I'm still living on my prediction that Kentucky was overrated and would not win the NCAA hoops title this past spring.  Didn't even make it to the championship game...  :)

Alright, now to get that trash out of your mind.  My friend Tim posted a nice picture today from Franconia Notch, where isn't too terribly far from my hometown in New Hampshire... 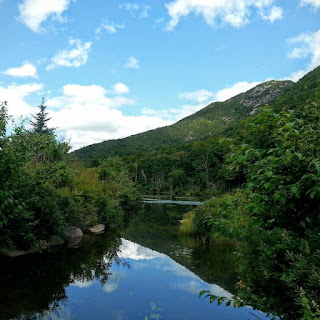 It's not year-round snow up there...  ;)  And this facebook share came from my friend Brigette, who it seems I'm stealing as much from now as anyone on social media... 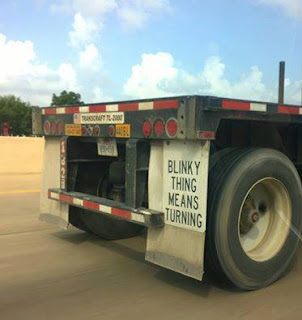 Another one of my pet peeves, people who don't use their turn signals and nearly kill me...  Yeah, I really need to start getting my rants out there more...  :)

That's it for tonight gang.  I just wanted to check in real quick.  Have a great week and I'll see you soon!

It's Time To Write

Good evening everyone.  It's been almost a month since I've bothered you.  I should (hopefully) have a lot more time to write in the near future.  Students are now returning to the University of Texas at Austin (which was evident when I saw the broken glass at the entrance to my apartment complex this morning), and that means that my countless hours of overtime for this summer are now done.  I was working on a big project in one of the dorms on campus this summer, and now I'll be able to put that time into my writing (unlucky you)...  I've been so busy that I haven't even studied my football.  I was toying with the thought of entering a random fantasy league online before the season begins, and I realized that I wouldn't have any idea who to draft.  I haven't looked at schedules yet, I don't know who the projected starters are for each team, etc, etc...  As you could probably guess, I do have my t.v. tuned into the NFL Network right now, as I'm mainly listening to the Chargers/Cardinals game.  I have $2.00 worth of baby bet action on the contest, in case you're interested ($1.00 each on San Diego (+3 1/2) and (Under 40).  The game is currently 9-0 Cards with 7:52 remaining in the first half.  The game will likely be long over once you've read this, but whatever...  :)

Speaking of football, can't miss (can't hit?) football picks will once again be coming your way from my "family of blogs."  A couple of changes are in store for this season (as seems to be the case every year).  This season, not only will my friend Joey be contributing his weekly bets, but I also convinced my brother Pete to throw in his favorite selections.  That's right, you'll be receiving wisdom from not just one, but TWO ticket writers at Las Vegas sportsbooks...  In the interest of keeping things easier on myself, AND hopefully improving our winning percentages, each of us will only be giving you our favorite three bets for each week.  These can be from college or NFL games, and they can be against the spread or on the over/under.  These picks will normally be published on Friday, and they should begin appearing at Coach's Parlay Card starting September 4th, just in time for the first full weekend of college football games.  The season is REALLY THAT CLOSE...  :D

Back to my "family of blogs," I hope to start writing a lot more everywhere.  I definitely wouldn't mind earning a living (or at least supplementing my income) by writing if I could just get myself focused and lined out.  I swear, I was so caught up this summer with my project at work that I barely had time to think about much else.  I worked overtime shifts since early July and most of this month, and I'm really looking forward to getting a chance to just RELAX a little...  Speaking of focus, if you've watched any preseason football, isn't the drop off astounding when teams are led by the second team quarterbacks as opposed to their starters???  Anyway, I'm paying a lot to rent out this space from Google, so I might as well you use it, right?  :)