The last time that we visited, I was getting ready to go to Las Vegas.  My ride to the Gulfport/Biloxi airport was my friend Nick.  Nick was also a valuable source of information seeing that I had not flown for several years.  The last time that I was in the friendly skies, downloading your boarding passes to the app on your smartphone was not a thing.  Nick also assured me that the size of my carry-on bag was fine.  Helpful Travel Tip:  If you do not have to check any of your luggage, bringing just a carry-on bag saves you a lot of time after arriving at your destination, since you get to skip the carousel.  It also eliminates the chance that the airline will lose your luggage.  It also eliminates baggage fees, if your chosen airline charges you for the privilege of bringing some things with you.  : )  Okay, so my friend Nick dropped me off, and the cool thing about flying out of a small airport - there was NO LINE for the TSA security check.  ZERO.  NONE.  As I was being processed by the four TSA agents who were working, one of the men said that I looked familiar.  I told him where I worked, and then he asked me what I did.  I then told him that I work in the sportsbook, and he lit up, and said that's where he knew me from.  At work my hair is gelled and combed back, and in real life I'm wearing a ballcap about 100% of the time, so I've got one of those Clark Kent/Superman things going.  ;)

I flew American Airlines on both flights to Las Vegas, and people would LOVE traveling that much more if their trips went as my smoothly as my trip to the desert.  First, I would highly recommend flying into and out of small airports if you can afford it.  As I said in my last post, I booked so far in advance that my flights were pretty inexpensive, which offset the costs of leaving and returning to Gulfport/Biloxi. 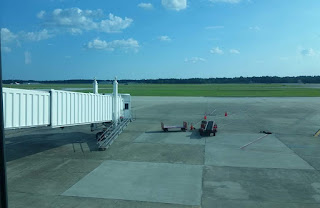 Look at that peaceful airport!  The plane was probably the smallest that I've ever flown on.  The left side of the plane had single seats (every seat was a window seat).  The right side of the plane had two seats (an aisle seat and a window seat).  My table tray was broken and safety-taped to the back of the seat in front of me.  That table tray was the EXTENT of my problems on my trip to Las Vegas.  Very smooth flight.  Before takeoff, I had posted that photo above on Facebook.  When I landed at the Dallas/Fort Worth (DFW) airport, I had a message waiting for me.  My friend Geoff asked me if I needed a ride when I landed in Las Vegas.  There is so much transportation to the Strip from McCarran International in Vegas that I had never worried about finding a ride, but HECK YEAH, I'll gladly take a ride to the Strip.  As my vacation approached, the most worrisome aspect was making my connecting flight at DFW, because the airport is simply HUGE, and I had just a little more than an hour til takeoff after arriving from Gulfport.  However, once I exited my initial flight, all of the gate information and the airport tramways (skylinks) at DFW were well-labeled, and I reached my connecting flight in plenty of time.  Unlike my first flight, this plane was BIG, and modern, with headphones being passed out for the video screen in front of you, on which you could play music, or watch a movie, etc...  I thought that I would sleep most of the way to Las Vegas, but I ended up watching about half of the movie 'Glass' once I realized that sleep simply wasn't going to happen.  Geoff has been to McCarran in Las Vegas several times, and finding him after I arrived was simple.  Geoff zipped me to Harrah's while giving me a flawless update on that night's Warriors/Raptors game.  This was the game where Durant came back and REALLY screwed up his health, yet the Warriors pulled out a victory.  Oh yeah.  Another factor in my flights to Las Vegas being so cheap was the times that I chose to fly.  I didn't leave Gulfport until about 7:30 p.m., and I didn't arrive in Las Vegas until almost midnight (and that's WITH the two hours in time that you gain by flying west), so yep, I completely missed Durant's return to the Warriors lineup.  However, I know that Geoff's recap of the game was flawless, because I watched the replay of it once I arrived at Harrah's, eating the first of what would be SEVERAL healthy meals during this trip...

Just note that a hidden layer of french fries is underneath all of the fried food that you can actually see pictured on top right there.  : )  This is a good time to give a shout out to the food court at Harrah's, which was open til 3:00 a.m. nightly, and had a pretty good selection of items to choose from (I had several).  That's all for now, but I'll start hitting you with some of the highlights of my trip the next time that I see you.  Have a great week everyone!
Posted by ~Coach at 12:09 AM No comments: