Hello everyone.  It's been more than a month since I've posted here, so I probably have something to say...  I've now been working for Caesar's Entertainment in Las Vegas for just over three months.  I work as a ticket writer for the sportsbooks at Bally's, Paris, and Planet Hollywood, and I absolutely love the job.  I have worked several jobs in the past where I haven't had much downtime, but when I do have occasions at this job when no one is in my betting line, I get to watch sports.  :)  The job itself consists of taking people's bets on horse races and sports, so the work itself is interesting.

I stopped playing poker for about two months (until returning to the tables over the weekend), and my new job was one of several factors contributing to that decision.  As I said, I like my job and I'd like to hold onto it, and putting in tons of hours at the poker tables and showing up for work tired while learning the job wouldn't have been in my best interest.  Not only do you want to avoid making mistakes at work, but it's hard to provide good customer service when you're tired and grumpy.  Another factor in taking the poker break was the start of the football season.  I bet on football more than any of the other sports combined, and it was going to be difficult having a football and poker bankroll if I wasn't winning, which leads us to the other reason for my break...  I was running cold at the poker tables.  I'm talking COLD my friends.  Ice, snow, BLIZZARD..., cold...  In the course of a week, I flopped three-of-a-kind (either in the form of a set or trips) about six times, and managed to lose every time.  I also took several other bad beats, and after taking a short break, I returned to playing.  When I've run bad in the past, I've taken breaks before returning to the tables, but on my "first" night back, I lost 40 dollars in an hour and a half, and I basically said "screw this..."  I did play again on Friday, Saturday, and Sunday after this two-month layoff, and I expect that you'll be hearing a lot more references to poker (if I start writing that often again)...  :)

Football.  Yes, the football season has contributed to less writing also.  Making my football bets, watching games, doing a little studying, etc...  It's almost unbelievable to me that it's December 6th.  The college football bowl season is rapidly approaching, and the NFL has four more weeks of regular season games before the playoffs begin.  I have done well during the bowl season in the past, so with my plans to continue playing poker, the next month ought to fly by also.

Twelve hours...  I've been working swing shifts recently (which I LOVE).  I'm a night owl by nature, and have gone on record several times stating that if it were left to me, I would get my eight hours of sleep from 4:00 a.m. to noon.  I worked from 3-11 on Friday and Saturday before a 1-9 shift on Sunday, and played poker after each shift.  I was off yesterday and today.  After sleeping sporadically yesterday, I finally crashed at about 4:00 a.m. Tuesday (today).  When I woke up, I could see just a little light coming through the blinds, and figured that it must be cloudy outside.  Before looking at the clock, I guessed what time it was (a game I often play)...  I figured that I hadn't been sleeping too long (the phone hadn't rang, I didn't remember getting up to go to the bathroom, etc..), so I thought that it was probably about 9:00 a.m.  Then I rolled over, and saw that it was 4:14.  But it wasn't dark outside, so...  Yes, I slept for TWELVE hours, and it seemed cloudy outside because it was ABOUT TO GET DARK, being 4:14 in the afternoon...  Turning on the t.v. and perusing the t.v. guide, I discovered that old episodes of 'Poker After Dark' were going to be airing until midnight, and that 'Planes, Trains, and Automobiles' would be starting at 1:00 a.m.  I'd call that a pretty good day...  :D

I fully intend to go out on the town and give you some pictures sometime in the near future, but for now I'll just leave you with this year's Christmas card... 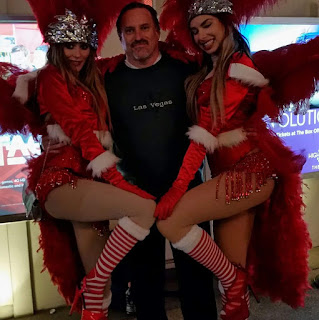 I hope that you have a tremendous holiday season, and that I'll post here again before 2017...  :)