Good morning everyone.  I had lofty ambitions regarding writing yesterday (making an entry in all four of my blogs), but I did finish my chores and catch up on some sleep, and since I'm still up when I shouldn't be, I thought I'd give you a post here.  I should be sleeping because the 2017 World Series of Poker begins in the morning (for me anyway).  Following an early buffet breakfast at the Rio with my friends Joey and Brian, I'll be watching this year's first bracelet event, the Casino Employee's Event.  I played this event back in 2006, only to watch my pocket aces get cracked by queens when a sinister lady arrived on the river.  Later this morning, I'll be watching Brian and hundreds of other players chase a coveted bracelet while I get my first look at this year's WSOP setup.  As I've said before, I can enjoy watching the action and learning as much as playing myself, and I'm sure that there will be a few (hundred) cash game tables available should I get the itch.  The best part of this time period that the WSOP is running (now through mid-July) is that there will be more games (cash and tournaments) all over town.  I like to refer to this time of the year in Las Vegas as 'Poker Season.'  #pokerseason  Here's a recent photo from the Flamingo, as the poker players started returning to the desert over Memorial Day Weekend... 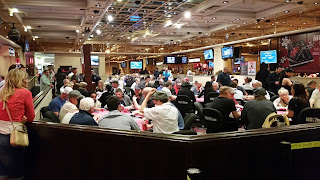 Even if I don't play a single hand at the Rio this summer, I'll be playing poker after my most of my shifts at work, and I'll have a multitude of games to choose from.  My current plan is to watch and play as much poker as possible in the next 1 1/2 months, and then to use the following month and a half to get ready for betting the upcoming football season.  If you're ever looking for me this summer, I'll be the one wearing the Texas State gear.  Wearing my Bobcat gear at the poker tables over the last few months has already initiated several conversations.

Football...  I contacted Joey and my brother Pete today, and they confirmed that they'll be joining me once again in making weekly football predictions this fall at my 'Coach's Parlay Card' blog.  My smart-ass brother asked me if I needed his Week 1 picks soon...  :)  Pete predicted the exact score of the Super Bowl correctly, so I guess I'll let it slide...  Anyway, in case you're not already aware, I enjoy predicting the outcomes of football games and wagering a little money on them, so I'm looking forward to the games kicking off late this summer.

I'm going to stop for now since I'll be waking up in just over four hours, but I'll have plenty of words for you throughout the summer.  Thanks again to all of you who are regular visitors here.  This blog just surpassed 115,000 total pageviews (quite a trick when you almost never write)...  ;)  Have a great week and I'll see you soon!