Good morning everyone.  I've got myself in the position where I still have a lot to tell you about my trip to Las Vegas, and I also just returned from my first visit to Central Texas in over five years.  That being said, the NFL's preseason schedule is in full swing, and the college football season begins two weeks from today (with a handful of games).  I'm telling you all that just to let you know that this blog post is going to be a little longer than normal.  I don't want to shortchange you on my trip to Las Vegas, but I also don't envision myself writing the seven-to-eight post series that I had originally planned on.  If football gets into full swing and I have a logjam of events that I've yet to write about, who knows what will happen...  : )  I recently upgraded my cable service to include the NFL Network, so I have some sweet, sweet preseason football to accompany me while I write tonight...  : )

When we last visited, I had arrived in Las Vegas, and I had eaten a BUNCH of fried food while watching the replay of that night's NBA Finals game (the Warriors won, but Durant came back and seriously injured himself).  During the next few days, I had planned treading pretty lightly, as I had errands to do ahead of seeing my favorite band, Blue October, perform at the Brooklyn Bowl on Friday (my flight arrived late on Monday night, and the fried food bonanza was being consumed early Tuesday morning).  I also wanted to play twelve hours of poker at the Flamingo by Friday so that I would be eligible for their freeroll tournament in the morning.  So I had three days to shake my jet lag, play my twelve hours, and do errands.  My errands included shopping for the room (I needed to buy some snacks for an eleven night stay), getting a haircut (at the inexpensive place I went to for the past two years in Vegas prior to moving), and buying my Blue October ticket.  All of these things went as planned, no problems.  Okay, well ONE PROBLEM.  During my first or second day in town, I was walking through the Linq.  I was entering fron the north side, coming from Harrah's, and there was enough foot traffic that we had a line of people entering the casino, and a line exiting.  After I had entered the building, a guy from the oncoming line turned his head to the left, facing me, when he proceeded to...., SNEEZE ON ME!!  I don't know about you, but having taught and coached for nine years, dealt poker, worked in sportsbooks (i.e., having been in the close vicinity of people), I have been coughed and sneezed on before, and then just KNOWN that I was going to get sick (which I did).  This was one of those instances, and with my crazy Las Vegas sleep schedule (I usually tend to get sick when I'm tired, immune system is weaker, etc....), I just knew at that moment...  I really wasn't affected until the second part of my stay, and because I was disciplined and made myself stay in my hotel room a lot longer than I would have liked considering that I was on vacation, I shook the bug and I was fine by the time that I flew back to Biloxi.

For now we're going to skip my poker playing and the Blue October concert, and fast forward to Saturday, when I first went to visit my friends and former coworkers.  I waited until the weekend to start seeing people because that's when the sportsbooks schedule more workers due to having more business.  I didn't get to see everyone that I know, but considering the number of friends that entails, having worked at three different books, I did see most everybody.  Saturday was the first of three different times that I went to the books, and I spent several hours there between those days, as reconnecting was as much a part of the trip as anything else.  Friends, concert, World Series of Poker, playing poker...  It's a pretty good reason to spend eleven days in Las Vegas.  : )  While I was at Bally's on Saturday, the news of the Anthony Davis trade broke, and we had just been talking about the Lakers five minutes earlier.  I will go on the record right now and say that I don't think the Lakers will be the team on the court that is favored to win the NBA title.  There are several older players on this team, and many that already have an injury history, but it should be interesting to watch (after football of course)...  : D

After I made my way to Paris (when I worked in Las Vegas, I could be scheduled at Bally's, Paris, or Planet Hollywood), I saw another friend and coworker (Jordan) who was throwing a birthday party for her daughter the next day at Sunset Park (a little south of the Strip).  I was invited (see, I have friends), and I went with my friend Geoff (the same Geoff that picked me up at the airport).  He worked at the World Series of Poker, and I have a whole other story about visiting him that Saturday night/Sunday morning, but we'll save that for later...

So now it's Sunday and we're at the birthday party.  Sunset Park turned out to be HUGE compared to my expectations, there was a nice breeze, and it was a very pleasant birthday party on a Sunday afternoon.  There were several pizzas, and after having already eaten $100 in Outback gift cards during the week, I only had two slices, but that's also a story for another day...  : )  Jordan's daughters are young, which is relevant to the story I'm about to tell you.  The girls had a blast, playing with the birthday gifts, eating, taking a trip over to the water park, etc... (in case you're not familiar with the concept of birthday parties)...  :P  ANYWAY, the party was coming to an end, and Jordan was helping others load up their car (chairs, etc...).  The girls were on the grass in front of me and Geoff playing with what is basically a souped-up Etch-A-Sketch, and Geoff and myself were standing behind them.  This is important to the story, because what happened next, it's not like our heroine was doing something for attention, or an audience, because she didn't know that anyone was watching her.  So the girls are playing, and suddenly the older sister stands up, extends her arms and looks up to the sky, Shawshank Redemption style, and EXCLAIMS, "THIS IS THE BEST DAY OF MY LIFE!!!"  I started laughing and turned to Geoff, asking, "Did you see that?!"  The best part is that it wasn't even her birthday, but her little sister's...  : D  I'm not crazy about using children's names in the blog, and I didn't think they were necessary to tell the story, so I hope that wasn't too confusing.  Here's a photo from the birthday party... 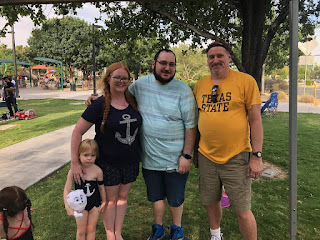 My initial thought looking at this photo is that I own a combination of at least TEN Texas State t-shirts and jerseys, but every time that I end up in a photo, I always seem to be wearing this yellow shirt...  That is something that I'll have to remedy.