"I think my ponytail is on too tight..." -Yvonne Gonzales- (Yvonne's response to not getting a reference I made).

Grrouchie:  "Excuse me, where do you have the ears of corn?"
Smith's Employee:  "Umm, I don't even know what that is..." -Grrouchie-

"No matter how much times passes, great friends always pick up right where they left off..."
-Summer Rodriguez-

"This is what happens when it snows in Texas..." -Gisele Verissimo-


Good evening everyone.  Long time, no see...  With the weather that we've had recently (and that we're forecast to have this weekend), I've pretty much accepted the fact that I'll stay home this weekend.  It's not like there's nothing on t.v., or that I have nothing to do here, but I'm ready for our Texas winter to be over.  My friend Verissimo posted this photo with that quote above when nasty weather hit the Metroplex (Dallas-Fort Worth area) recently... 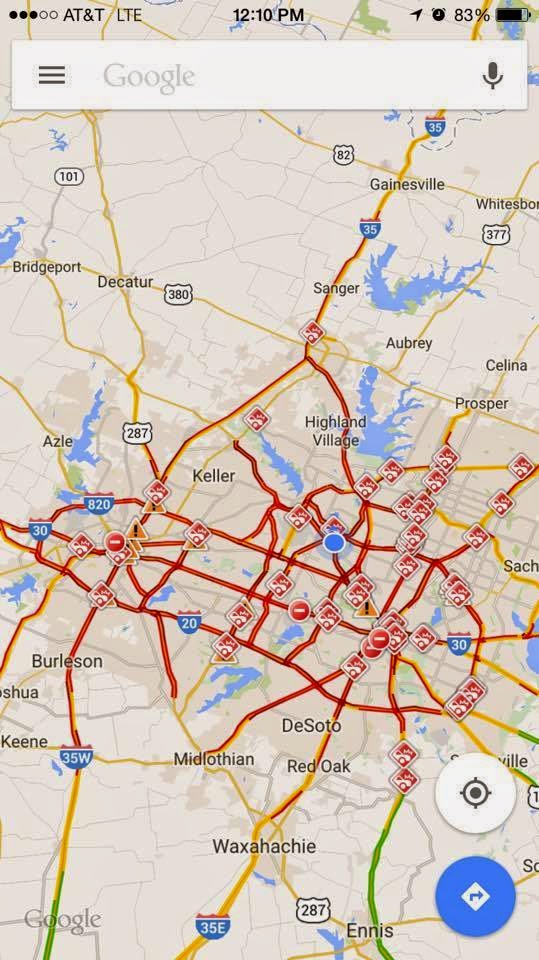 Click on that photo and you'll see a lot of bad news for drivers.  You can see from the top of the photo that this took place at about noon also.  Here in Austin (and at the University of Texas more specifically) we've had delayed starts to workdays because the biggest threat to drivers has been ice in the early morning while the temperatures are still below freezing.  It's not supposed to get quite that cold this weekend, but it will still be cool enough, and we have an 80% chance of rain on Sunday, followed by a 100% chance on Monday.

Like I said a minute ago, there's plenty to watch on t.v., and I have plenty to do.  The conference tournaments are starting up in men's college basketball, and I still have my NHL and NBA.  I'm noticing just now that my Bovada account is down only $2.24 from what it was on February 8th (with no deposits, and with microbet upon microbet).  I still haven't downloaded the Bovada poker again, but that's something that might happen pretty soon.  As always, I have plenty that I can do around the apartment.  This isn't even taking into account the blog reading that I've gotten behind on.  It seems that's almost all of my fellow bloggers (listed on the right) have made at least one post that I haven't read yet (while some have posted several times).  A vast majority of the time I will comment on my friends' entries after they have posted, just to let them know that I've stopped by at the least.  There hasn't been much commenting on my part this week...  :)  This just shows a bunch of laziness on my part, especially since I didn't have to report to work until 1:00 p.m. yesterday...  As a preferred night owl, my first move when discovering a delayed start at work the next day is too stay up later that night.

In addition to having reading to catch up on, I've also been neglecting all of my blogs.  I waited so long to rant about Gonzaga not deserving a #1 seed in the NCAA tournament that they went and lost a game before I did.  While I'm talking about college basketball (and this isn't a rant), I'll go on record right now with my belief that I don't think that Kentucky will go unbeaten this season.  The Wildcats have been tested a few times in a conference that isn't very tough.  If Kentucky played in the ACC, they'd probably have more than one loss already.

Since I mentioned it, I've been pondering downloading the Bovada poker (just for research for my poker blog, of course)...  :P

I think I'm gonna let y'all off the hook for now, but you may see me here again this weekend.  Have a good one until then, and remember to set your clocks ahead an hour before you go to bed on Saturday night!