Good morning everyone.  It's been a pretty busy week for me out here in the desert.  I imagine that I'll be able to say that to you pretty much every week, but the past few days included finding a place to live, so this is still a little unique.  Let's rewind back to Tuesday morning...  I've been staying with my brother's family since I arrived in town about a month ago, and I've often traveled to the Strip and/or the Rio when my brother has commuted to work.  Pete has been working six days a week (with three of those days including double shifts) with the World Series of Poker going on.  Naturally, Tuesday was Pete's lone day off when I received a morning call from the place that I stayed at for 2 1/2 months when I was last in Vegas two years ago.  I came by here last Friday, and of course they had no units available, but they took my phone number, in case something should open up.  Wonderful...  But alas, they did call, and Pete agreed to run me over here so that I could snag the lone available unit.  It's obviously been great being able to stay with my brother's family after my whirlwind return to Las Vegas (which I touched on a few posts back, but still haven't spelled out in complete detail), and I'm very appreciative.  My best guess is that it will take two more trips at most to move the rest of my stuff here from their place, and then I'll have a complete mess (I'll be completely moved in)...  :)  Of course I'll miss Carmen's cooking, and the things that kids say.  My nephew, who is going out for the freshman football team, recently quipped that he wants to switch high schools because the school that he currently attends doesn't utilize wide receivers in their offense, the position that he'd like to play...  :)

So back to Tuesday...  My brother and niece had dropped me off here, and I got my key and "moved in," with what I hastily threw together on short notice.  Since I had virtually none of my stuff, OF COURSE I got a phone call later that day for a Wednesday job interview.  I messaged Pete and let him know what I'd need for the job interview the next day, and then made plans with my friend Emmy for later on Wednesday.  NOTE:  If you live in Las Vegas, your friends WILL COME TO VISIT...  :)  So now it's Wednesday morning, and low and behold, I get ANOTHER phone call, this one informing me that my interview has to be moved...  So my meeting with Emmy and her "best friend" (this is an "inside credit card joke" - brand new category) gets moved to a lunch date.  NOTE:  If you live in Las Vegas, your friends will often BUY YOU LUNCH...  Thanks Emmy, thanks again Kyleigh...  :D  After lunch, I then go to my job interview, and then return to the middle of the Strip to watch my friends play craps.  Vegas life is non-stop, in case you haven't heard...  ;)

So back to today, when my brother and I brought a substantial load of my stuff to my new place before he headed off to work, and then my friend Joey took me to Walmart.  NOTE:  Joey, Pete, and myself will once again be giving you our favorite weekly football bets again this season.  Football season is sneaking up on me, as busy as I've been...  Joey, who I dealt poker with at the Riviera,  has once again said "anytime" to shuttling me to Walmart for groceries when I need them.  Joey was very helpful to me in this regard two years ago, and of course I try to purchase them a month at a time, because who wants to shop every ten seconds anyway???  This was something that amazed me working at my hometown Walmart, the customers that I'd seemingly see on a daily basis.  Of course it wasn't many, but I couldn't do it...  Walmart would be an obvious employment choice for me if there was a store located closer to the Strip (and maybe it will still happen in the future).  I bring that up because when Joey and I rolled my full cart up to the register, I noticed the cashier responding to a message in her earpiece.  My eyes immediately shot to her name badge, at which point I stated, "I KNEW you were a CSM..."  I knew this because she had a radio, and trust me, cashiers don't want a radio...  :)  That story is for my friends back at the Littleton store...  ;)  And I can't tag all of you on Facebook, because I have a poker story too, with poker people to tag...  :P  So Joey and I have tentative plans to make an appearance at the World Series of Poker next Friday (and maybe a quick shopping trip first Joey, for those football magazines and some cold food, since the fridge seems to be working...  LOL).  And before you judge me people, Joey is skipping town for most of July...  :P

And now we go back in time to last Saturday, which seems like ages ago due to my busy week... 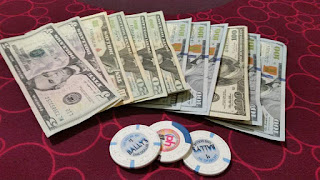 I had a week-long run or so of bad luck in the cash games (pocket kings getting rundown by a pair with a backdoor flush draw after I shoved post flop, pocket aces getting called and beat by 5-7 suited after I shoved preflop, things like that for you poker people).  So I decided to play in the Flamingo's $60.00 buy-in NL poker tournament after taking a few days off, and low and behold, we had 71 total entrants, with only 6 getting paid.  Can you say SHOVEFEST?  Well, karma tilted back in my favor (most notably when my ace-jack cracked ace-queen), and I won some races (ace-king vs. pocket jacks, nines vs. king-ten suited), and I zigged and zagged, and ended up in a 4-way chop for first place, and the $680.00 that you see above.  A "chop" occurs when the remaining players agree to split the remaining prize pool in a tournament in some fashion.  In this case, the 4 of us split the last $2,720.00 evenly.  This tournament cash allowed me to recoup all of the money that I had lost in the cash games since returning to town.  It also convinced me that I need to make tournaments my focus, as opposed to live cash games.  Going as far back as Joey and I working at the Riviera, our friend Rick has told me forever that I should play more tournments, since I seem to do so well in them.  I love playing them, but I hate the juice (the percentage) that the casino takes to run the tournies.  However, the house gets money from cash games also, and I have historically fared better in tournies.  Two $1,000.00, three $500.00, and a $100.00-plus cash in freeroll tournaments immediately come to mind.  SOOOO, when my life slows down a bit, I will be trying my hand (pun intended) in some more poker tournaments.  Also, when life slows down a little, I will start writing about poker in my poker blog again.  It just makes more sense when I'm actually living in Vegas...  ;)

Okay, all of that should take you a second to digest.  Have a great weekend and I'll see you soon!