Good morning everyone.  Well, all of my things are completely moved into my new place, and let me tell you, it's a complete mess.  After I went to the Rio last night for my brother's shift at the World Series of Poker, we ventured back to the outskirts of the city, and I got a good night's sleep (like 7:00 a.m. til 4:00 p.m.).  Hey, I had to detox from the Red Bulls, so sue me...  Then I began transferring many of my belongings from three big plastic totes into more transportation-friendly duffle bags and the like.  I was surprised to discover that I was able to fit the rest of my things into his car, and after enjoying one last home-cooked meal (London Broil, mashed potatoes, and corn), Pete and myself made our way across the desert to my new place.  My thanks again go out to Pete and Carmen for putting me up at their house, for cooking for me (I'll seriously have to use poker comps for any meal that involves ANY LEVEL of preparation or effort)  :) , and for shuttling me to and from the Strip.  I'm hopeful that I got enough rest at their place to be able to conquer the desert.

So, back to my complete mess.  My place, a small one-bedroom, has stuff scattered EVERYWHERE.  Since I plan on unpacking and job hunting over the next few days, I thought that I'd check in with y'all again now.  It's now been nine days since I've played poker, but it's not all bad living with the memory a nice win for more than a week.  At the same time, it's hard not playing with all of the action that's in town now, but getting settled and finding a job has to happen sometime.  Practicality...  I've discovered that writing at this time of night is beneficial due to the wi-fi here.  In the wee hours of the morning, more people are sleeping, so the wireless works better.  Something that I'm fighting endlessly with my new place is the AC unit.  I have wall-mounted air-conditioning as opposed to central air here, and the unit works, but I constantly go from being cold to hot, so I'm adjusting the controls seemingly nonstop.  First world problems, eh?

I don't have a specific game-plan laid out yet, but I anticipate visiting the Strip at least once this week, and then spending the weekend playing poker.  If I get this place straightened-out (semi sort-of) and fill out a bunch of online job apps, I believe I'll feel more at peace playing cards.  HR offices tend to be closed during the weekend, so that's my plan for the moment.  Speaking of the moment, the time change from the east coast is often prevalent in my thoughts.  The Walmart in my hometown closes at 10:00 p.m., and working a closing shift meant that I'd be at the store until 10:30 p.m.  Due to the three-hour difference, it's 7:30 p.m. here at that time, and the sun is still shining.  Ironically, that 5:30 a.m. opening shift that I struggled waking up for, well, it's 2:30 a.m. here at that time, and I'm OFTEN still awake here in Las Vegas.  My habit of being a night owl works out very well here in the desert, but it conflicts with watching football games (the sport I like to wager on).  The early round of Sunday NFL games begins at 10:00 a.m., and NCAA action on Saturdays kicks off even earlier.  As I've mentioned in another of my blogs (and maybe even here), I plan on wagering less on football this time around, and focusing more on poker.  I'll still study and enjoy the game, but as far as the poker goes, and that "just like riding a bicycle" idiom...  I feel very confident in my poker right now, and I've probably railed more hands at the World Series this summer than any other human...  :)  I'm extremely hopeful that this trip to the desert will be the one that sees me making my living (or a substantial amount of secondary income) as a poker player.  For those of you who have never been to the World Series, it looks something like this... 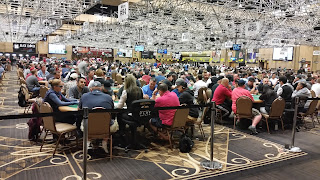 As for the blog, I don't anticipate writing until early next week, unless something newsworthy happens.  However, I thought that I'd leave you with a few photos of some of the most notable bodybuilders in the Austin/San Marcos area.  It's been so long since I've consistently stolen from the lives of my friends, hasn't it?  :) 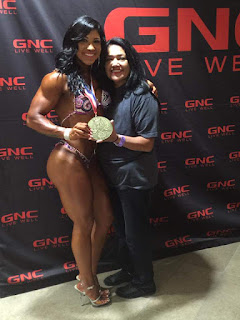 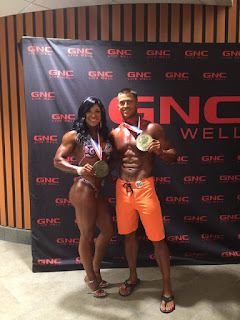 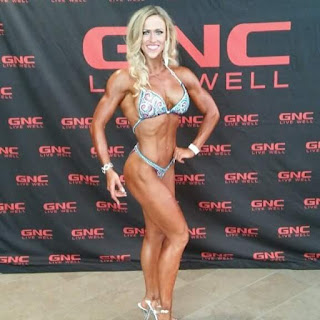 The top two photos feature my friend and former softball player Leanne.  If you've followed my blog for any length of time, you've seen Leanne featured countless times, so often in fact that I probably owe her a cheeseburger (or something that healthy people actually eat)...  ;)  Leanne is posing with her mom Lupe in the top shot, and with her boyfriend Cody in the second photo (I couldn't choose Leanne)...  :)  Along with my friend Molly, who is showcased in the bottom picture, Leanne and Cody apparently did very well at a competition in Austin this weekend.  Congratulations everyone!!

And that's a wrap for now.  Have a great week and I'll see y'all next time!