Good morning everyone.  It's about 5:00 a.m. in the desert as I begin typing this for you.  As I've done over the past several weekends, I played in the Flamingo's weekly freeroll torunament at 10:00 a.m. on Friday, and then proceeded to stay on the Strip until about 6:00 a.m. Saturday morning.  Then I've slept through the day on Saturday, and stayed up playing poker through the night til Sunday morning.  This has resulted in Sunday being a day of disjointed sleep.  I had set my alarm at 4:45 p.m. so that I could watch the Hall of Fame Game (the first preseason football game of the year, between the Packers and the Colts), and I actually woke up on my own by 4:00.  I'm an addict (although I didn't make any bets on the game).  Well, I woke up only to find out that the game had been canceled due to poor field conditions.  Paint...  Yes, the paint that had been used on the field in the early afternoon apparently hardened into an unsafe substance (the midfield area and endzones had been painted).  A great start to the season for the NFL, all in all...  Anyway, I ate something and decided to go back to sleep.  I woke back up at 3:00 a.m., and two hours later, here I am, doing a post for you.

Speaking of watching t.v. (well, until football games are canceled due to paint), I thought that I'd share something with you.  Having several past jobs where I've been extremely busy and had countless things to keep track of, I bought (and bought and bought) a bunch of memo pads.  I'd misplace them, pack them away when moving, buy more, etc...  Well, the place where I'm staying has basic cable, and no t.v. guide channel.  This results in me using my phone to search the t.v. listings (www.tvtv.us), and then recording the times and channels of the things that I want to watch... 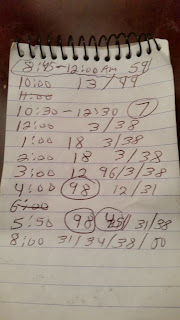 I figure that if I stay here for only five more years, I'll be able to use all of my memo pads...  ;)  Ironically, there was a lot of great t.v. last night (when I inevitably got tired).  Not having digital cable, and the viewing choices that I've previously been accustomed to, there have been some tough nights in the past month and a half finding something that I wanted to watch.  Now that the Olympics have started, there always seems to be something on.  Throw in 'Cast Away' and 'The Break Up' being on last night (at the same time, naturally), and there was a lot to choose from.  The Olympics coverage has improved tremendously from the time when I was a child.  Scrolling through the t.v. listings on my phone last night, I found one hour when no less than four networks were simaltaneously providing coverage.  I also watched an episode of 'Undercover Boss' last night, which featured the CEO of the MGM properties.  How sad is it that I get excited when something about Las Vegas in on t.v., when I'm... LIVING IN LAS VEGAS???  :)  Now that I think back on it, I took a nap after the H.O.F. game cancellation, then woke back up, and then went back to sleep again...  It's tough getting old... ;)

The poker in town remains slow (mostly locals), so I'm going to finish going through the belongings that I haven't sorted through this week.  This will also be the week that I do my football studying (and some poker studying).  I honestly don't mind making fewer trips to the Strip while the temperatures are blistering.  It appears that we have finally turned the corner, and after having several highs of about 115 recently, 108 seems to be the highest temperature that we'll see in the next two weeks.  It's now been 2 1/2 months since I've had a job, and I'm hoping to continue my success at the poker tables so that I can extend that number.  Some good fortune on my football betting would also be nice, but as I've said recently, I won't be wagering near as much on games as I have in the past unless I see some success.  Watching football games at the expense of playing poker on the weekends when I was out here two years ago was a huge mistake.  Now I just need to figure out a way to go without sleep on the weekends for five months straight...  :P

As you can probably tell by the important topics that I'm writing about today, things are going pretty well in the desert for me so far.  I'm going to be absolutely unbearable when the temperatures cool, the football season begins, and the poker games improve...  ;)  Speaking of 'bears...'  Anyway, when I was working for Walmart in my hometown, my friend Angel told me and my friend Damon about a path that we could use when we walked to work (actually, Angel may have just told me, and I may have passed the information on to Damon, but I'd rather blame Angel for potentially getting both of us mauled)...  ;)  Long story short, Damon's walking to work one day last spring, and a bear crosses his path.  He arrived at work safely, and I believe that's the last time that either of us used the path.  I think I've actually told that story here before, but I didn't have this helpful meme to go with it... 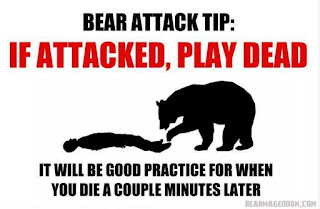 I have to thank my friend Carren for sharing this one, and I hope that's helpful Damon...  :)

I think that it's time for me to hit the 'publish' button so that I can grab a bite to eat before writing an entry for my poker blog, which you'll be able to find here in a few hours.  Have a great week and I'll see you soon!