Where Have I Been?

"I paid attention to the construction signs and got in the correct lane.  You ignored them for miles and now you want me to let you in.  Not going to happen..." -via Cynthia

"Alex has been helping me pack all day and I made a donation box.  I said, "Whatever you want to donate, put in here."  He fills it up, and I say, "Wow, you want to donate all this?"  He's like, "Wait, what does donate mean?"  Donation box is now empty..." -Raquel Ayala-

Good evening everyone!  Where have y'all been?  Wait..., what's that?  You're saying that I was supposed to do a blog entry on TUESDAY, and that I haven't been heard from until now?  Doesn't sound like me, but it is...  I hope that y'all had a great week.  Things picked up for me a little bit at work this week, and I knew that this three-day weekend was on the horizon, SOOOO...  I decided that I'd give you a short little entry while I'm watching hockey and basketball.  If I was one of those people who make predictions, I'd venture a guess that you shouldn't be expecting too many posts on Saturday evenings after the start of August however...  Just a hunch...  For you gambling types, I put my money on the Kings (-1 1/2) and the Pacers (straight up) to win tonight.  The Kings bet pays (+230) and the Pacers bet pays (+260), so I'll come out ahead if I hit on either of them...  The Pacers are up 7 at the end of the 1st quarter, and the Kings are down 1 at the end of the 1st period.  Let me throw in a couple of photos for you before I do a little typing.  This beautiful shot is from my friend Kristen... 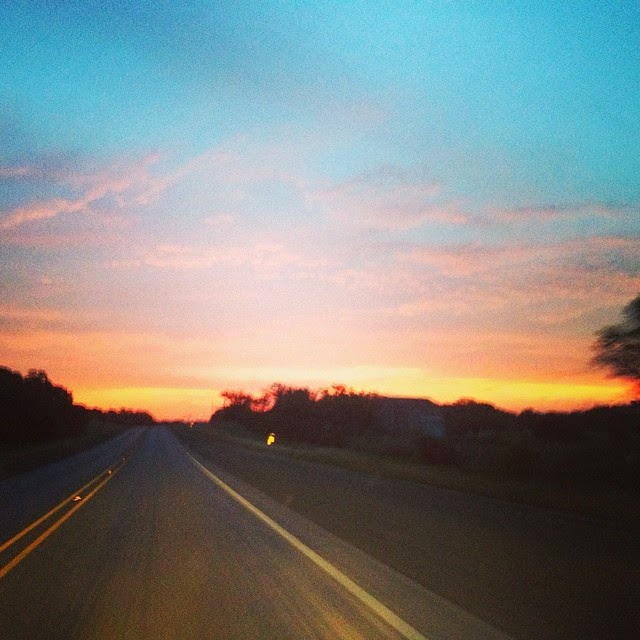 God blessed Texas, eh?  Have I ever mentioned that I've seen some beautiful sunrises in Las Vegas when I was still awake at 5:30 in the morning???  ;)  This next picture is from my friend Chamberlain, who somehow convinced professional golfer Adam Scott to pose with her on the course... 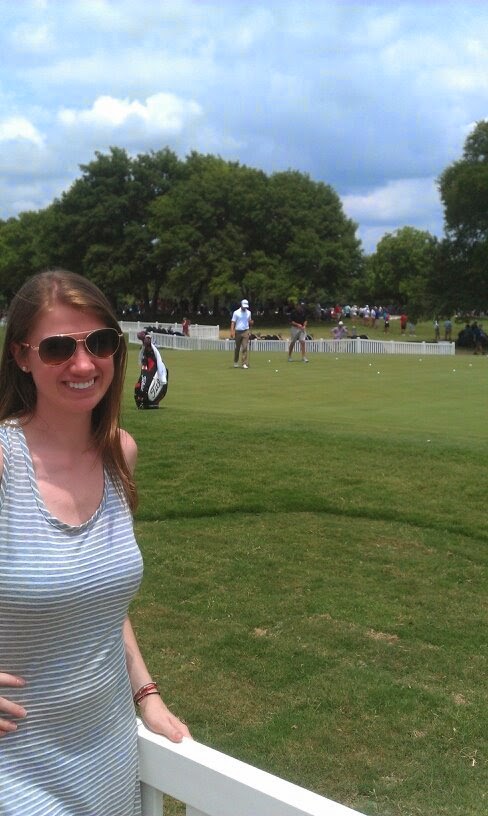 Chamberlain titled this shot "Me & Adam Scott!" - she also said, "I followed Mr. Scott around all day today, so we pretty much are best friends now..."

It's going to be difficult for me to proceed after that, but I'll give it a shot...  If you were able to get inside my head, you would discover that it's the same old story in there.  My thoughts keep drifting to the desert, and the countdown to being there is now under ten weeks.  Moving and poker and football keep running through my head...  The most exciting thing about reaching Memorial Day Weekend and the three days that it gives me is the opportunity to make more progress toward moving - sad, huh?  :)  The World Series of Poker begins in Las Vegas on Tuesday, and while I'm sad that I won't be there for it, I know that once it ends on July 14th, I'll have less than 3 weeks to wait.  I mentioned earlier that you can expect fewer (if any) Saturday evening entries once August gets here.  I would also guess that the posts that you'll start seeing at that point will become shorter, but that you'll see more of them.  You can also expect to see a LOT MORE content about poker and sports betting, and the various observations that I'll be making about living in Las Vegas. I'm going to attempt to transition in that direction as my moving date draws closer.  I think that I've mentioned that although I LOVE San Marcos, it comes become small at times.  The same thing goes for Austin...  I actually went down to 6th Street again a few weekends back (and I may tonight also), but pound for pound, I prefer the nightlife in Las Vegas.  After spending much of my life growing up in small towns, and having even taught and coached in a few, I find it comical that I eventually get bored and restless in places like San Marcos and Austin.  I am SO SPOILED...  ;) Like I said, I'm eventually going to have to find some water to live near (or at least take a LONG vacation near at some point), but I'd like to make some money first.  And let's be clear, when I say "water," I don't mean the San Marcos River or Lake LBJ, but the OCEAN...  After visiting Atlantic City five years ago, I was ready to move there RIGHT THEN, but I intend to be less lazy and see what the Pacific Ocean has to offer on this visit to the left coast.  I just keep getting this eerie feeling that I'm going to LOVE California, and that I'm gonna be like, "WHY did I take SO LONG to get myself out here?!"  I'm not a betting man, but if I was...  ;)  #justahunch

Okay, well since we've established that I'm still alive, I'm going to watch the end of these games, but I'll do my best to get you another entry by Tuesday.  Have an outstanding Memorial Day Weekend and I'll see you again in a few days!