"The ONLY thing I'm consistent about is being inconsistent..." -Belyne Gonzalez-

"When you walk with purpose, you collide with destiny..." -Bertice Berry- (via Erin Farias)

"You know you're outta shape when you get tired grating cheese..." -Jenny Davidson-

"The dream is free, but the hustle is sold separately..." -via Tim Hawkins-

Good morning everyone.  Yes, early, VERY EARLY Sunday morning...  ;)  I should be packing right now, but I'm staying up late doing this one last post for you before I leave for Las Vegas. Although I won't be heading out until Wednesday, I have plenty of packing and last minute details to take care of.  Again, if you want to know how things are going on Wednesday, you can follow my progress on Twitter.  And yeah, that will be ALL DAY AND NIGHT on Wednesday...  I'll post every couple of hours on Twitter and Facebook, which basically means every time that I hit the next evidence of civilization along I-10 West.  I'll also be in San Marcos on Tuesday running last minute errands and will almost certainly end up on the Square if you want to stop by and give me a handshake, hug, high five, fist bump, or whatever the cool kids are doing nowadays...

As I promised you last time, I have some photos from my outgoing press conference at the University of Texas at Austin... 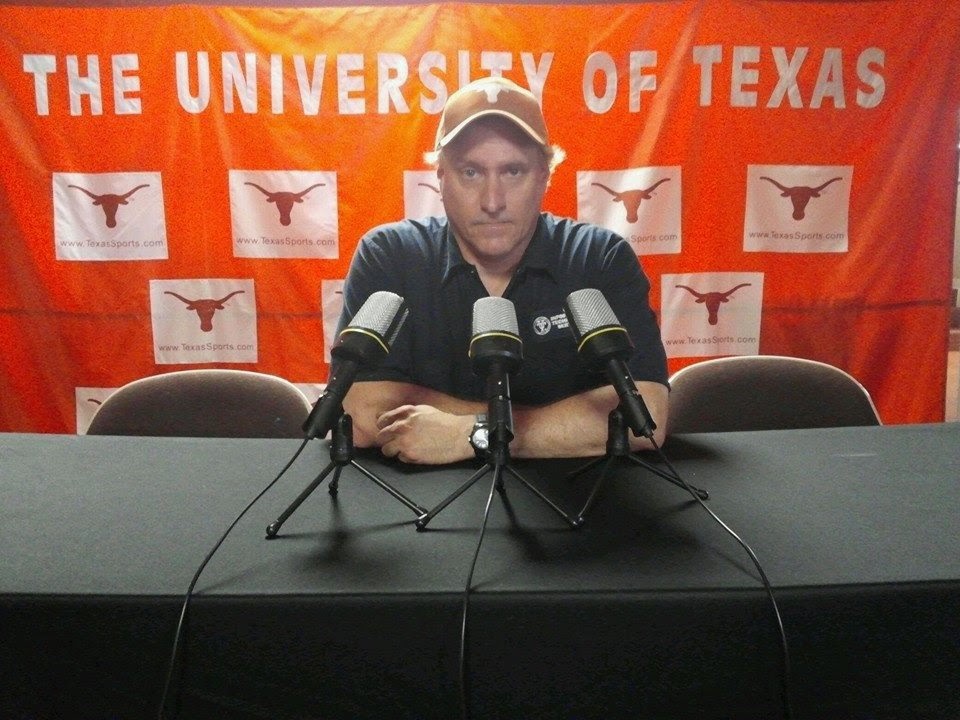 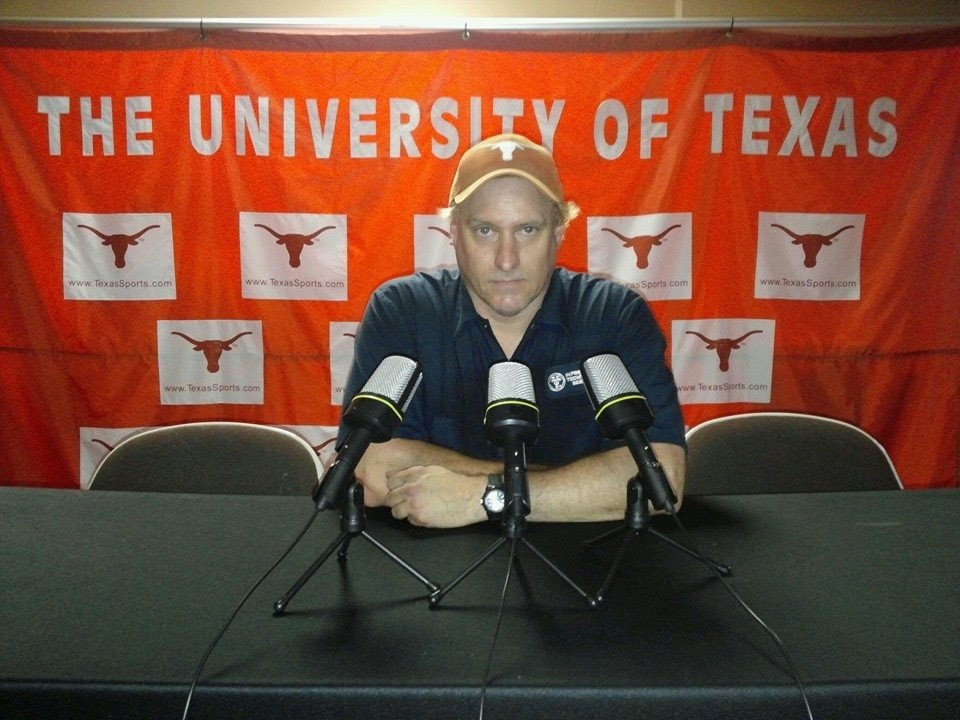 If it's not obvious from the pictures, I was getting more than a little agitated at the questions from the media as the presser wore on...

"Weren't you robbed the last time you tried this Coach?"

"Coach, why would you bet on sports?  Have you ever got a game right?"

"Don't the players in the poker room bait their hooks with worms when they see you coming Coach???"


I'm here to tell you that you just have to keep your composure when you're in front of those microphones and the cameras start flashing and recording...  OR I was near the press room last week and we stopped and took a few photos on our way to lunch...  ;)  I actually had a very nice farewell at work on Friday.  My boss told me that I was welcome back if I return to Texas (he hopes that I succeed in Las Vegas, but if I do return to Austin, I'm more than welcome back)...  I told him that I appreciated it and that it was a very nice sentiment.  A group of us went to lunch nearby at a wing place called 'Pluckers' (figure it out...), and my friends Jordan and Brett picked up my tab (thanks again guys).  You should have seen my persistence, as I valiantly finished my lemon pepper wings and ice tea (I normally just ate a Clif Bar for lunch)...  :)  I worked with a good group of people, and the money that I saved up over the past year will enable me to survive in the desert for AT LEAST a week...  ;)  Hook 'Em!

I also enjoyed a very nice going away lunch today with my brother's family.  Talk about ramping things up from a Clif Bar...  Fried pickles, house salad with ranch dressing, sirloin steak, loaded baked potato, macaroni and cheese, rolls, and sweet tea.  There are preliminary rumors that my brother's family is considering a move to Las Vegas in the future, which would be AWESOME...  :D

As far as arriving in Las Vegas, the stars are already aligning themselves for a potentially outstanding Labor Day Weekend as Pete P. Peters and Rob (fellow poker bloggers) have plans to be in town, and now Lightning (another poker blogger) is also considering a quick trip to the desert...  Have I already mentioned that Labor Day Weekend kicks off the college football season???  :D

Speaking of Lightning, it wouldn't be right if I finished this post with "borrowing" from a friend (for the very first time ever, of course).  When I saw this photo earlier today (actually on Saturday, as it is now officially Sunday), I thought to myself:  "Wow, you're just BEGGING to be in the blog now Brittany!  A photo with the Spurs championship trophy, AND throwing in that it's your dad's birthday, just to clinch it???" 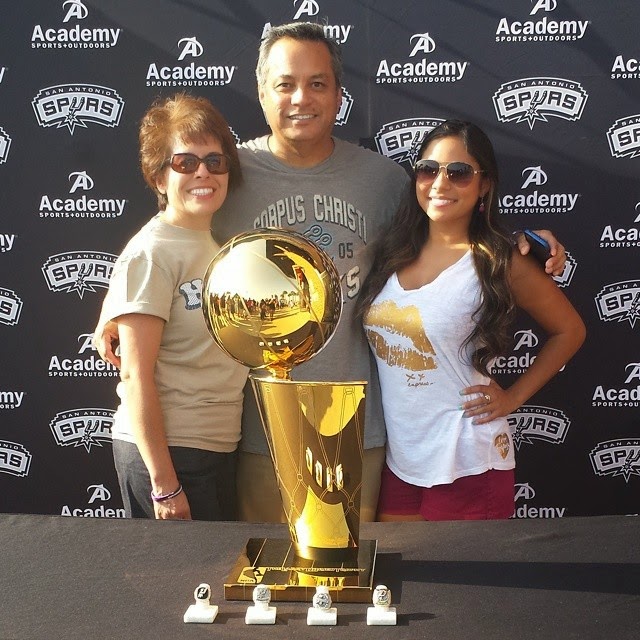 Outstanding photo, all the way around, and happy birthday Brittany's and Carrie's dad!  ;)  I don't recall campaigning this hard to be in the blog since the days of Alyssa, who told me that she's going to be attending graduate school in the fall (like that's an excuse not to make football predictions)...  :P  Although Alyssa will be doing homework and cheering on her Texans, Joey and I will have football picks for you here in about (let me check...)..., A MONTH?!  GOODNESS GRACIOUS...  :)

Thanks again to all of you who support this little blog, and I hope that you'll continue (or begin) to enjoy the journey as the scene changes to Las Vegas.  Have a great week and I'll touch base with you after I reach the desert...  :)