Good evening everyone.  As I sit here beginning to type this entry, the Ravens/Broncos game is scoreless at 11:09 of the first quarter - the NFL is BACK!!!  :D  I have to say that I'm very proud of the performance of last week's celebrity experts as I start this post.  The experts went 11-0 on the Longhorns game and 10-1 on the Bobcats opener with some very close picks.  Alyssa and I also went 2-0 on these games (with Alyssa's prediction being closer for each contest).  This Saturday finds the Longhorns (1-0 and 56-7 winners over New Mexico State last week) traveling to face BYU (0-1 after falling 19-16 at Virginia last Saturday).  The Bobcats (1-0 and 22-15 victors at Southern Mississippi last Saturday) will host Prairie View A&M (1-0 after beating Texas Southern 37-13 last weekend at BBVA Compass Stadium in Houston).  And here are the celebrity experts' selections for Week 2:

There are two things that I want to note here.  First of all, last week after I had published my football entry, I tagged some of my facebook friends (including Belyne) to the status that I entered to notify them of the post that I had published.  My intent was to let them know that they would be invited to be celebrity experts on a Friday in the near future. Well, after I had done so (and before the Texas/New Mexico State game was played), Belyne gave me a prediction of 52-7 Longhorns (the final turned out to be 56-7).  Her prediction is very close to mine this week, so I think that she predicted well once again...  ;)  Also, you might have noticed the THREE predictions of 35-14 Longhorns (along with a pick of 35-16 Horns).  I just found that interesting out of ten total predictions...

And now what you've all been waiting for..., updates on my fantasy football team!  Wes Welker just caught a touchdown pass!!!  :)  Okay, although that's true, it's Alyssa's turn now.  Predictably, the blog views spiked over the weekend (almost surely due to her debut), and now the Texans will be playing football too...  #lookout  And here's my co-pilot... 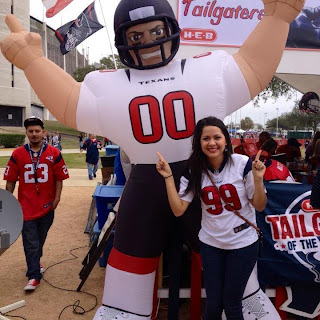 Hello again!  I want to start off Alyssa's Corner by bragging that my Texans beat the Cowboys last Thursday!  Yes, I understand it was preseason (as the Cowboys fans keep repeating), but a win is a win.  :)  Also last Thursday was my office's potluck lunch!  I was super excited to eat some very delicious home cooked food...mostly because I still eat like a college student and eat pizza on the reg.  I decided to go with something safe...so I made spaghetti.  Everyone likes spaghetti, right?...WRONG!  Not a single person ate my dish...not even me.  But I have been going through Pinterest and I will dominate the next potluck...I just couldn't compete with the older ladies' dishes.  Now for my predictions...

I honestly don't know if my favorite part of that was that Alyssa didn't eat her own spaghetti or that she's going to "dominate" the next potluck...  :)  Oh, and Wes Welker just caught ANOTHER touchdown pass everyone!  #fantasyfootball


And now for me...  Well..., last week I went out on that limb (having no previous games to base my picks on), and that limb BUSTED!  I went 3-7 in picking my ten favorite plays of the week.  I was correct in taking the Bobcats and Longhorns to win, but if I don't slide those selections into my "ten best bets," well, you get the idea...  :)  Here's what I have for you this weekend:

The Bobcats host their season opener this weekend against the Panthers from Prairie View A&M.  Due to the fact that the Panthers play in a lower division, Vegas doesn't put odds on the game.  I think that the Cats are going to open Bobcat Stadium with a 41-10 victory over Prairie View on Saturday.  The Longhorns are going to be visiting the Cougars of BYU in Utah on Saturday, and the Horns are a seven-point favorite (NOTE:  All of the lines and overs/unders in this post are Vegas lines as of last night, when I made my predictions...).  I predict that Texas is going to beat BYU 33-17 in Provo on Saturday.


And there you have it my friends.  Week 2 of the college football season and the first week of NFL action are upon us...  I hope that you have a great football weekend and I'll see you again on Monday!