"So I asked my daughter if I should shave off my beard.  She said, "yeah, you're not a duck hunter"..." -Steve Armstrong-

Good evening everyone.  As you can see by the title above, it is my intention to keep this post shorter than my birthday entry.  When you highlight the high points of a whole day, it just takes a really long time...  :D  That being said, I had a great homecoming and I have plenty to write about. Before I get into what I'm going to cover tonight, I do want to say that I intend to make some regular poker posts in the near future now that I've joined Bovada.  I just have to find a regular tournament with a day, time, block of time, and structure that I like...

Homecoming...  I KNEW that I would have a good time on Saturday and that I probably won't get down to San Marcos again very soon (UT plays 3 of their next 4 games here in Austin).  The problem was getting motivated to leave my apartment...  I finally did my wash at 9:30 a.m., and then I watched the first half of the Texas A&M/Vanderbilt game before leaving Austin shortly after 1:00 p.m.  I parked on the Square at about 2:00 p.m. and then leisurely made my way over to the tailgate at Bobcat Stadium.  When I arrived and started checking things out, it didn't take long at all before I heard, "hey, didn't you use to work up at the Veranda?!"  I smiled and said that I did, and then I was asked if I wanted a beer.  SURE...  :)  In the next few minutes I not only had a beer, but I also had a wristband to get beers throughout the day from the tailgate sponsored by The Den. Let me take this opportunity to once again thank Z, Micah, and Brandon (who works for Logan's Roadhouse), and to encourage you to stop by The Den and Logan's in San Marcos when you get the opportunity.  Throughout the course of the day I stopped by The Den's tent a few more times, and while they fed me a cheeseburger and a few more beers, I in no way abused their kindness.  I actually slightly abused the kindness of SEVERAL PEOPLE as the day progressed, as you'll soon see...  :)  It's funny how that works, isn't it?  Be nice to people, and they'll generally reciprocate your kindness and generosity...  I'm sure that I've said it here before, but I'm blessed to know a lot of really cool people, and I'm really glad that I went to school at (Southwest) Texas State University...

While talking with Z, Micah, and Brandon, we figured out that the Bobcats only have one more game in San Marcos this season (Western Kentucky on November 23rd).  When you couple that with the fact that it was homecoming, it goes a long way in explaining why this particular tailgate was OUTSTANDING...  There must have been 3 times as many people at the tailgate on Saturday as there were at the one on my birthday 2 weeks ago.  Next I ran into Molly, who gave me a big hug and told me that she hadn't drank in FOURTEEN WEEKS (and I believe her), and she led me to The Marc's tent where I saw my friend Zane (consistently one of the best status posters on facebook) and had another beer.  Be sure to visit The Marc when you get a chance (this was formerly the Texas Music Theater, and was my employer the year before last).

I had to hunt around a little bit to find my friends Courtney and Eric, who were once again manning the Treehouse Apartments' tent.  It seems that the spaces in the tailgating parking lot are "first-come, first-served," so they weren't in the same place as they were two weeks ago.  Finding them was well-worth the search (okay, I actually ran into Courtney while she was walking around and didn't TECHNICALLY find the tent on my own), and what was their punishment for getting a spot late?  They were set up UNDER TREES on a sunny day - DARN...  :)  As I enjoyed a few more beers, AND jalapeno poppers, AND a sausage wrap with my friends, we discussed what a crazy tailgate this was.  Among MANY of the things that were going on, some of the tailgaters were jumping the fence that we were set up near to use the restroom (even though there were SEVERAL "port-o-potties" located on each end of the lot).  I only mention this because a friend of mine that works for the University Police Department (who looked VERY BUSY on Saturday) was approaching our tent and I was prepared to say hello when two of these geniuses hopped back over the fence and onto the parking lot RIGHT AS my friend came around the corner... #badtimingforthem  :)

At some point in the afternoon (as I made several separate visits to see Courtney and Eric) I found my friend and 2013 Texas State Homecoming Queen Nominee Gabby.  I also saw my friends Carolina (who pointed me in the right direction), Amy, and Mo in the vicinity of the Chi-O tent, but this little story (one of my favorite memories of the day) is about Gabby.  I had been speaking with Gabby for a few minutes when she offered me a beer.  Of course I accepted (because I'm polite like that), and I expected Gabby to head toward a cooler and return shortly.  INSTEAD, Gabby reaches down into her "purse" and produces a beer.  At this point I look down, and then I started laughing HYSTERICALLY... 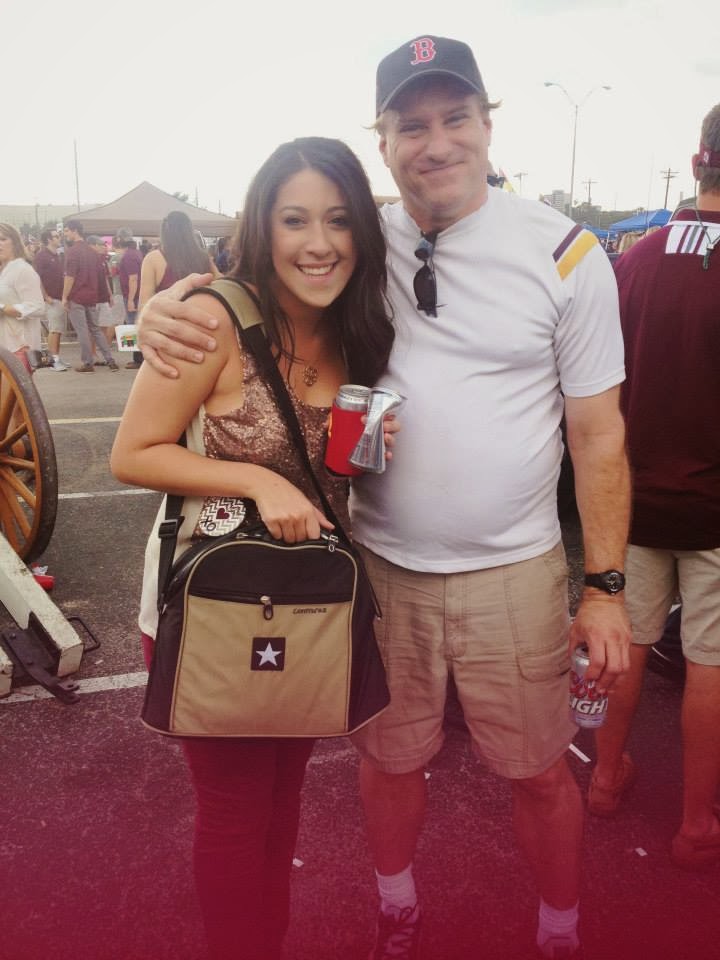 As you can see, her purse isn't a purse AT ALL, and Gabby is very resourceful...  :D  I had been standing on Gabby's left shoulder as we spoke, and I just hadn't really noticed what she was carrying, with her bag on her right shoulder (I specifically asked Gabby to "feature" the bag in this picture for this story).  As for the old man in the photo, that's what 100 years old looks like...  ;) Immediately upon seeing this shot, I told Gabby that I was going to have all kinds of fun with it, given the "wings" that are protruding from beneath my ballcap, how "white" I am (I usually tan well, but haven't been outside much), and how "squinty" I am (the shades are doing me A LOT OF GOOD on my collar)...  I also made a good choice of attire (the Bobcats sport maroon, gold, and white, which is why I wore the shirt) as the shirt does a SPECTACULAR JOB of displaying my 1,700-pound frame...  ;)  Back to Gabby, her cleverness is getting her two more mentions here... She was in a phone conversation with somebody during our visit, someone who was trying to find her at the tailgate.  The parking lot housing the tailgate might be 200 yards long, and while giving her friend directions, Gabby says, "keep walking..."  :)  Gabby and I also spoke fondly of our friend Alyssa (yes, that Alyssa) during this time, and Gabby gave the BEST POSSIBLE DESCRIPTION of the following photo last week when she stated, "THIS IS GOLD!" 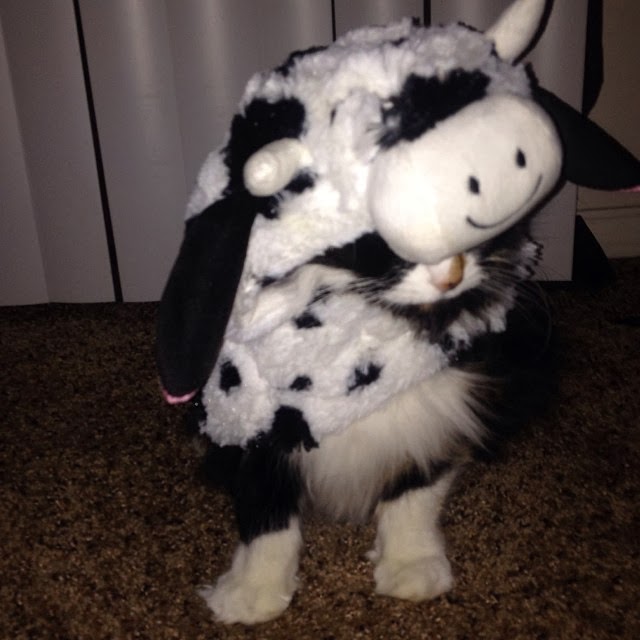 Yes, if you recognize this as being the blog's official mascot, Belle The Cat, you're correct.  I guess this is what happens when life gets slow up in Abilene...  :P  Actually, this is the costume that Alyssa found for Belle for the pet photo contest that she referenced in the most recent 'Football Friday' post.  Speaking of that entry, it looks very much like my '10 Best Bets' for the weekend are about to go 3-7, and this snapshot WILL BE my photo for this week (I'm totally blaming my losing record last week on posting the wrong picture of Belle)...  ;)  This shot is just SCREAMING, "okay, I'll pose for your picture - hurry up Mom..."  :)

Well, I knew that this entry was going to get away from me, and we haven't even discussed how my friend James hooked me up with a ticket to the football game again, OR how WILD it was at the end, or my trip to the Square on Saturday night.  PLENTY to talk about the next time that I see you...  Have a good one and I'll see you again on Wednesday!