"I don't think you have to brag about how good you are if you actually are..."
-Belyne Gonzalez- https://twitter.com/b_jai2012

"I need someone who sees the fire in my eyes and wants to play with it..."
-via Francesca Welsh- www.facebook.com/pages/Training-Truths-The-Good-The-Bad-The-Ugly/600392829996057

"It's amazing how much winning a big hand can improve one's disposition..."
-Rob Solomon- robvegaspoker.blogspot.com/

Good morning everyone.  I have to be honest with you, it seems like I've been on vacation, having made zero posts since Thursday...  The break came at a great time for me, as I spent the weekend down in San Antonio with my brother's family (we'll get to that in a minute).  First, here's your obligatory Las Vegas photo... 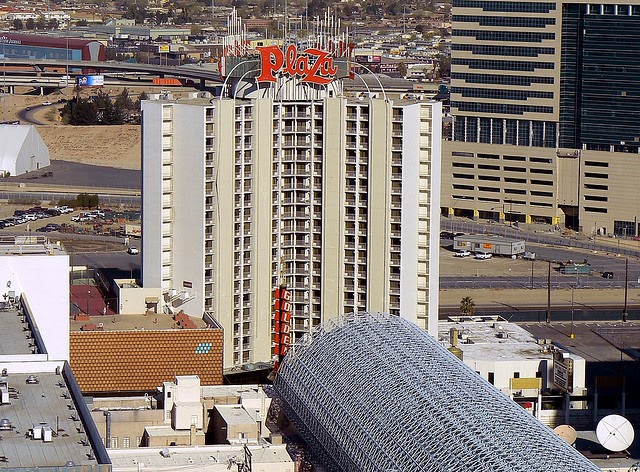 This is the Plaza, a relatively inexpensive option for tourists who would like to stay in downtown Las Vegas during their visit to the desert.  I just read a short article in the online version of the Las Vegas Review-Journal about plans for putting a 45,000-square-foot structure on the roof of this hotel.  This would house a hockey rink, and would include seating for 3,500 people.  Evidently, the Orleans Arena isn't renewing their lease with the local hockey team, the Las Vegas Wranglers, and this would be their new home.  I don't know if this is a good idea, but it's very interesting...

Okay..., now going back to the very top of this post, I would like to thank the three young ladies who have become my "go to" people for stealing material from.  While spending this past weekend in San Antonio with my brother's family (we'll get to that in a minute), I spent almost zero time on social media (Why would I?  I hadn't seen my brother's family in quite some time - we'll get to that in a minute).  With that being said, I had not reposted any facebook statuses or retweeted any tweets over the weekend (which equates to I had NOTHING for that very top section of this entry). HOWEVER, I knew that I could go directly to Leanne's and Francesca's facebook pages, and to Belyne's twitter account, and that I'd be all set...  :)  And since I steal from these ladies REGULARLY, I also included links to their respective facebook and twitter pages, so that you can give them some well-deserved traffic.  OH, and that Rob guy up there..., well, I decided to include a link to his blog also, rather than giving him the 1% of the nonexistent money that I've made from writing this blog...  ;)

Like I said the last time that I visited with you, I had Joey rush his basketball picks so that I could do my blog entry on Thursday, leaving my whole weekend open to visit with my brother's family.  I have a nephew who became a teenager today, and we were celebrating his birthday over the weekend.  This party started on Friday night, when my brother, niece, and nephew picked me up at my place in Austin.  Somewhere during the drive to San Antonio, and my splitting a 40-piece pack of McDonald's Chicken McNuggets with the kids, the bright idea (mine, surely) was born to see who could stay up later, myself or my nephew.  I missed my customary afternoon nap to pack for the weekend, and Elijah is (well..., WAS 12 years old at the time).  This ended badly for me, as I finally conceded defeat at 12:45 a.m., Saturday morning.  OH, guess what...  The U.S. was playing Russia in Olympic ice hockey, at SIX THIRTY A.M., Saturday morning.  Well, when I opened my eyes, it was about 7:00 a.m., and my nephew was still in bed, but was already awake. Down the stairs we went, and watched a thrilling, 8-shot shootout, 3-2 U.S. overtime victory.  It's important to note here that I later took a two-hour nap, and that my nephew stayed awake in the hours leading up to his birthday party.  We proceeded to have a nice birthday party for Elijah (burgers, dogs, bratwurst, mac salad, beans, cake) - great by my standards...  ;)  #yum  Thanks Carmen!  THEN someone had the bright idea to go bowling...  Unfortunately my sister and my other niece and nephew didn't join us, because they missed it...  Elijah, the 12 year-old who woke up at 6:00 a.m. on Friday, went to bed at almost 1:00 a.m., slept for 6 hours, and whose previous high game in bowling was a 154, led off with a strike.  He followed that up with a strike, then another, and then ANOTHER...  When all the dust had settled, Elijah bowled a 213, and ended up with a 490 series!  Not only did my nephew kick my butt in bowling, but both my niece Sarah and Elijah SLAUGHTERED ME in Flappy Bird.  Oh, and my brother Pete bowled a 594 series, just to add insult to injury...  ;)

So yeah, I did have a very enjoyable weekend, and after going to bed at EIGHT P.M. last night to catch up, I got back to a little sports betting today.  I can see that when I return to Las Vegas, prop bets will get a lot more attention (they received almost none) than they did when I lived in the desert.  Tonight (among other things) I bet on the over for Duncan's and Griffin's rebound totals (10 1/2 and 10, respectively) in the Spurs/Clippers game, in addition to whether Deandre Jordan could surpass 26 points, rebounds, and blocks combined).  I also made some bets on tomorrow's Olympic ice hockey action.  These bets are essentially hedges (2 of the 3 anyway).  If the U.S. loses (men's or women's, I could win).  Okay, the women play on THURSDAY, and not tomorrow - stop correcting me...  I have almost settled on the idea that if and when I do return to Las Vegas (yes, I'm still shooting for this summer), this blog may become mainly a diary of my daily sports betting and poker results, you know..., for the week that my bankroll survives...  ;)

Okay, that's enough for now.  I have to work tomorrow, and most likely, that will include overtime (I need the money, right?)...  Have a great week, and I'll see you again on Saturday!


Wednesday 2-19 Betting Update:  I failed to include this reminder yesterday, but I'll keep posting my little "baby bets" on twitter https://twitter.com/coachatx with the hashtag #babybets.  Since I started keeping track of them on 2-5, my account has risen ASTRONOMICALLY, from $39.18 to $41.88...  Have a good one!