Was That A Serious Question?

"I wonder what animals truly think when you sit there and talk to them...  I talk to mine A LOT!"
-Heather Gortney-

"Haters will see you walk on water and say it's because you can't swim..."
-via Training Truths:  The Good, The Bad, The Ugly- (via facebook)

"I think my brain just melted and came out of my ears..." -Alyssa Lesa-

Good morning everyone.  Tuesday night post, Tuesday morning post..., whatever...  ;)  Here's a photo of one of my favorite places in Las Vegas, since you asked... 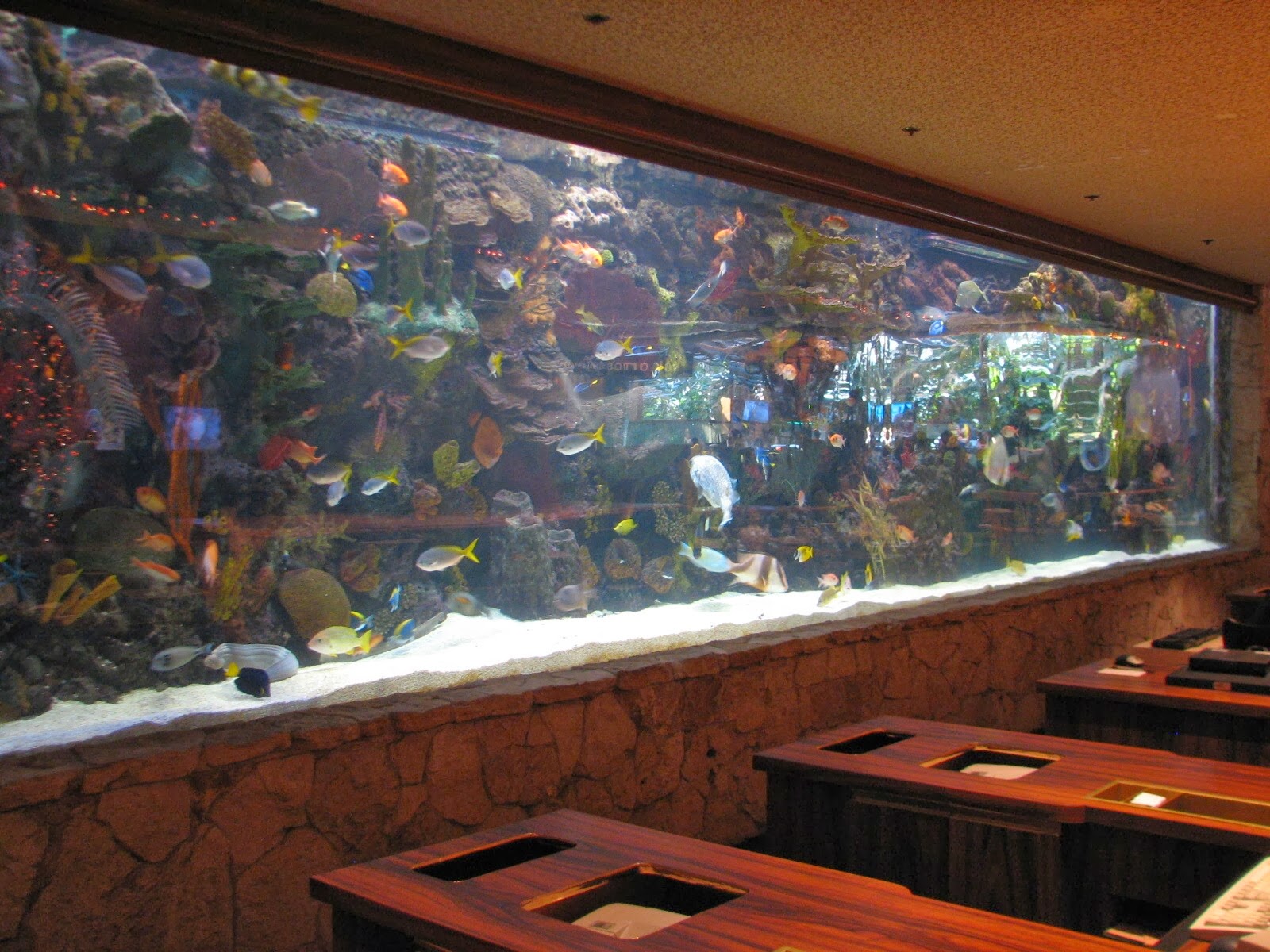 This is the aquarium behind the registration desk at the Mirage Hotel & Casino.  During my early poker "career" (I know..., it's a stretch), I visited this aquarium on breaks during several cash game sessions (3/6 limit hold 'em).  The Mirage is where I learned how to "play" (another stretch, I know) poker.

Speaking of the ocean (well, not really), my friend Melanie posted this photo on facebook recently... 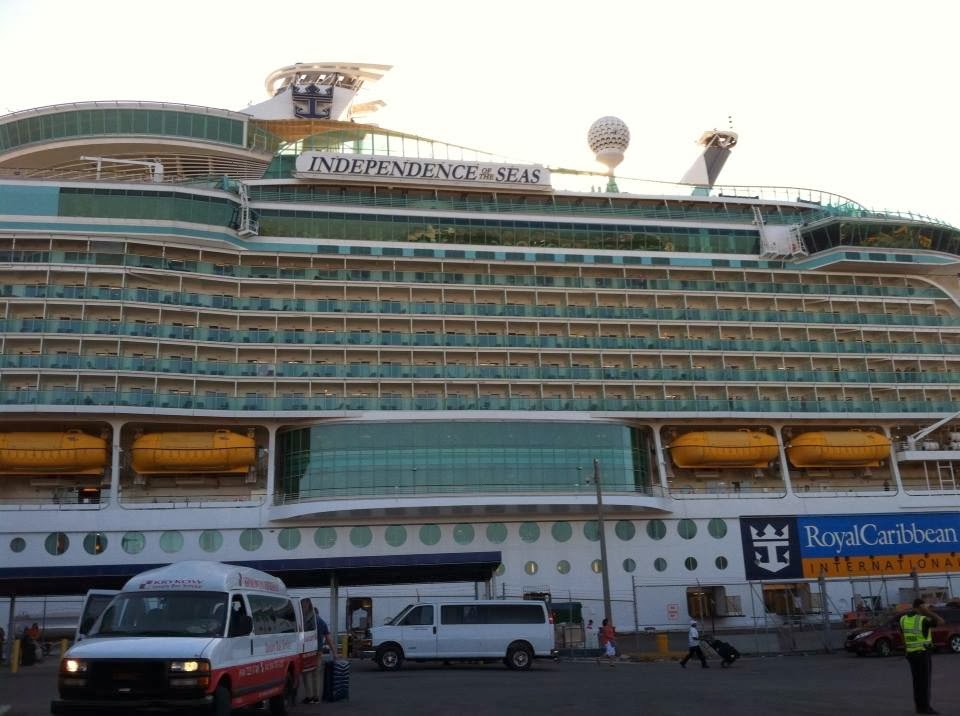 Melanie's family recently took a cruise, and when I saw this picture, I was like, "WOW, THAT'S A BIG BOAT!"  If you've ever seen Tommy Lee Jones in 'The Fugitive,' imagine that I'm saying this in the same tone that he exclaimed, "WOW, THAT'S A BIG FISH!"  ;)  I've probably told you before that although I love water (the ocean), I've never lived near it.  Well, I've never been on a cruise either.  And as for this ship..., GOODNESS GRACIOUS!  Hope you had fun Melanie...  :)

Since we're playing compare and contrast (were we?), my friend Amanda posted this photo on facebook a few days ago... 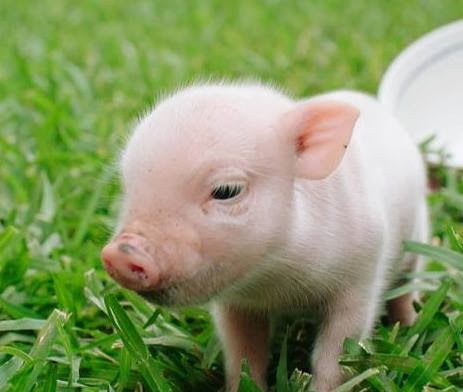 The ship is big, the pig is small (compare and contrast - try to keep up people)...  ;)  ANYWAY, Amanda tagged her little sister Jessica (who I always addressed as 'Lil Villalpando' while she was growing up - yeah..., well anyway...) to this status, with the line, "Here's our pig.  Let's go half on one.  You can have him on weekends..."  Jessica (obviously excited) replied, "I would kidnap him from you and give him to grandma to make tamales..."  :O  I think that the teacup pig dream officially came to an end when Amanda responded, "WOW!  He is not going near you!"  :D

So we were talking about horrific sandwiches (we were last week, really)...  Our friend Francesca shared her photo of the infamous tuna and sauerkraut sandwich with mustard (on wheat bread I believe) with us, and I proceeded to FOOLISHLY invite others to share their creations with us... Well, fellow blogger Lightning happened to have some leftover sauerkraut in his fridge, and he expanded on Francesca's recipe... 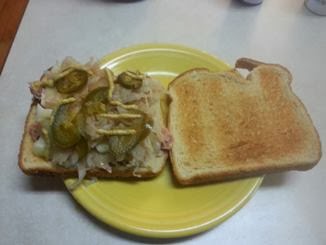 Due to Francesca's "inspiration" (his word), Lightning made this sandwich on toasted honey wheat bread, with tuna, sauerkraut, jalapeno peppers, melted pepper jack cheese, and spicy brown mustard...  WOW...  I don't even know where to start...  :P

What, you want more animals?  This is a story that I forgot to share with you a week ago...  When I visited San Antonio for my nephew's birthday, I forgot to tell you about Diamond and Big Red. Now Diamond has been a member of my brother's household for quite a while, while Big Red was recently (very recently) adopted by my sister-in-law Carmen.  It was only after spending a little time with them that I learned that Big Red was a victim of neglect as a kitten, and was evidently still lucky to be alive.  Not only that, but Diamond wasn't very fond of her adopted brother when he joined their household only a week before I stayed with them, and was rumored to have been hissing and taking swats at Big Red.  However, whenever you pick up Big Red, he INSTANTLY purrs, and I mean PURRS...  I told Pete's family that this must be the happiest cat on the planet, the way he reacts to receiving attention.  Well..., this is a photo of the cats that my brother posted this weekend... 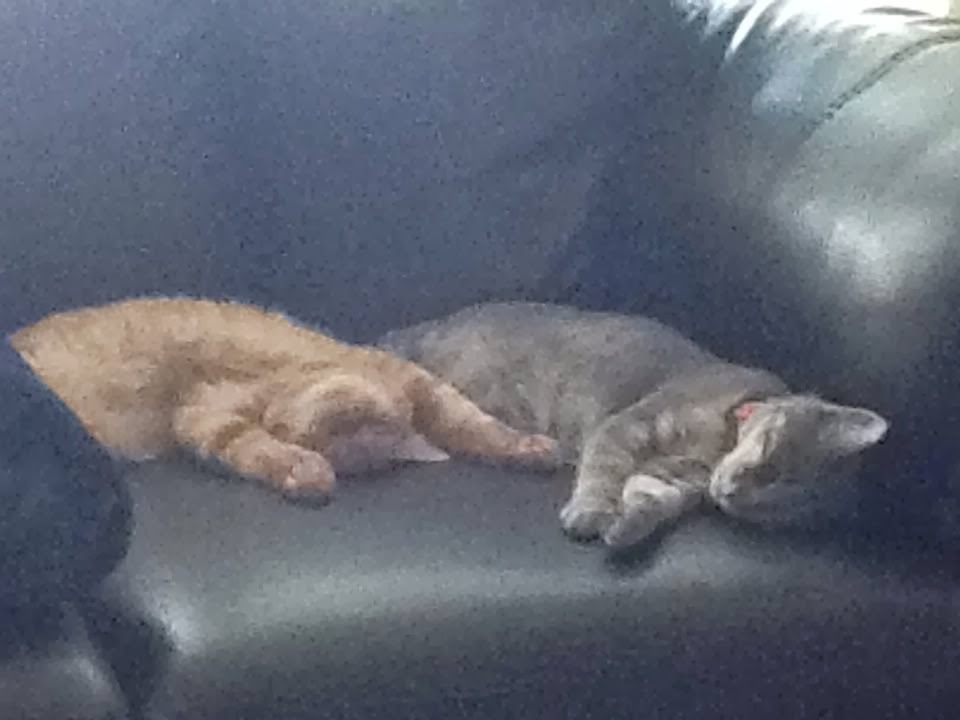 AWWWWWWW...  :D  And it's obvious that Big Red is going to fit into this sports household, as he's CLEARLY dreaming about football...  #touchdown  ;)

Now about that fight...  I have never watched a female UFC fight, but I knew that Ronda Rousey was going to be taking on Sara McMann in a bout on Saturday night.  Although I didn't bet on the match between this pair of Olympians, I had seen that Rousey was the favorite, according to Las Vegas (Rousey -300/McMann +400).  Well, out of the blue on Saturday, I decided to ask the UFC expert that I know what her opinion was on this bout.  I simply messaged Leanne with "Rousey or McMann," to which I got the INSTANT RESPONSE, "Was that a serious question?..."  (imagine a few seconds of dead silence, with tumbleweeds tumbling across the horizon, followed by...)  BAHAHAHA!  ;)  Leanne evidently knows what she's talking about, as Rousey disposed of McMann in 66 seconds...  I should have bet...  :(

Speaking of betting, I have now made 94 bets since February 5th in my little Bovada experiment, and my balance has gone from $39.18 to $53.43 (why did I waste all of this time on poker?)...  ;)  And yeah, I know what you're thinking...  "Coach, why did you waste all of your time on football for that matter?..."  It seems that my wheelhouse is basketball and Olympic hockey...  :P  Speaking of hoops, I have made the executive decision for the blog that Joey and myself WILL NOT be making score predictions for every single NCAA Men's Tourney contest.  We will probably be giving you our 3-5 favorite personal picks for each day of the Round of 64, and then we'll play it by ear.  It's just too much work with no payback, I was already dreading it, and I know that Joey will be too busy working at the Palace Station Sportsbook during that time to get into that much detail.

Well, on that note of disappointment, I hope that you're still able to sleep tonight...  :)  Have a great week and I'll see you again on Saturday!