"I got some double-unders!!!" -Jennifer Hernandez-

"Experience may be the best teacher, but it's also the most expensive..." -Doyle Brunson-

"Tomorrow is the big day.  I just have to survive a bunch of my closest friends trying to get me completely wasted tonight..." -Grrouchie- www.grrouchie.com

"Chocolate... chip... cookies... I need this to sustain living...  This is way more serious than a craving..." -Jessica Johnson-

Good evening everyone.  I'm going to start with some photos tonight, which will help us segue into the monumentally important things that I want to talk about (you longtime readers..., well, both of you must love how I've transitioned from "rambles" to segues over time).

What you have to love about this photo that my friend Valerie shared is that it rings true.  You probably remember my recent post where I shared several seemingly professional-quality profile photos that my friends posted on facebook.  HOWEVER, if you've ever been TAGGED in a photo... :P  And no, we don't care at all about this being two different cats, so save it...  ;)  Sports?  Okay, twist my arm... 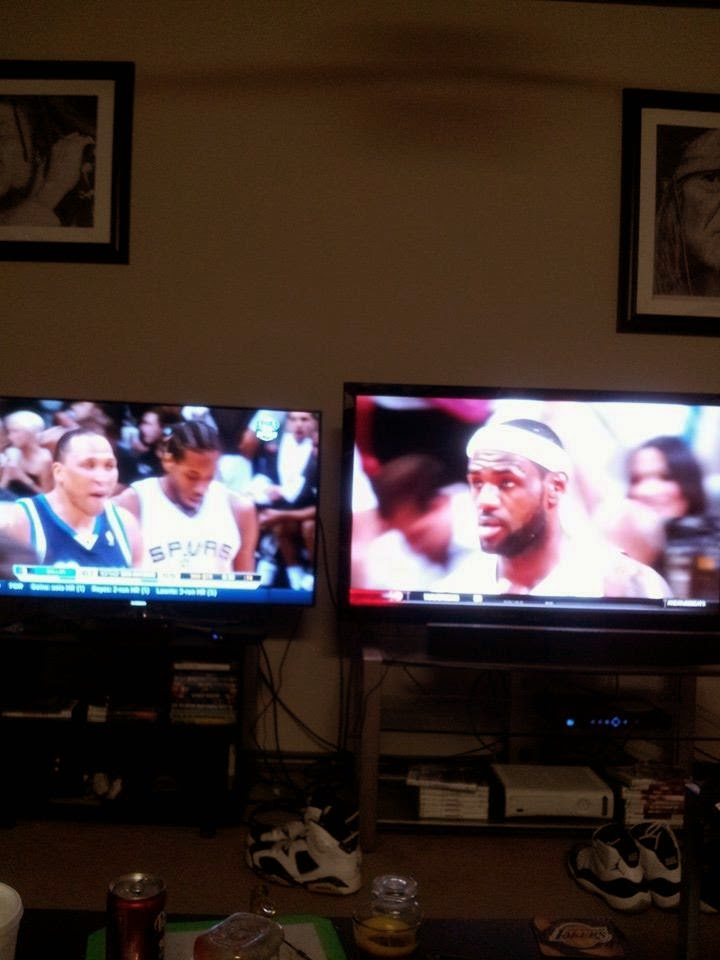 My friend Ana shared this picture with us, and it's a perfect example of how it's supposed to be done (well, except that I'd have the Spurs playing on the bigger screen)...  ;)  I actually stole this idea from my brother years back after visiting his place.  I have to tell you, tonight is the first time that I've really watched Brooklyn play for any significant length of time this season, and I think that they could be a handful for the Heat in the next round (if that matchup materializes).  Since we're talking about sports, these are the $1.00 bets that I have at Bovada tonight...

Can you say "home team?"  You might also notice that some of these bets are hedges against the prop bets that I made heading into the playoffs (very complicated things are taking place here)...  ;) Since we're still speaking of sports, you may have heard that the NFL released it's regular season schedule this week.  First off, I have to say that I really love the schedule that my Steelers drew. We lost A LOT of players to free agency, but we'll have a fighting chance with the games that the league gave us for this season.  I shared the schedule with my facebook friends, and had to once again laugh at the fact that out of almost 750 people, Katelynn, Gabby, and Grrouchie are the only friends that I have on the social media outlet who share my love for the Steelers.  Speaking of Mr. Grrouchie, it's time to congratulate him once again as he is now officially married.  With the food theme that is permeating this entry tonight, I wanted to include the menu from his wedding (maybe the best that I've ever seen), but I'm not going to ask him for his permission since he JUST GOT MARRIED!  ;)  Congratulations y'all!

Just a couple of more notes from the sports world for ya, and then we'll move on.  Based on early facebook statuses, I think that this season's Cowboys/Texans game could easily sell out a 500,000-seat venue if one were available.  Also, I wanted to take a moment to thank the NBC family of networks for broadcasting all of this season's NHL playoffs.  I remember moving to Texas from New Hampshire after I graduated from high school, and it was like hockey was nonexistent... And now it's time for some bottomless..., BROCCOLI?! 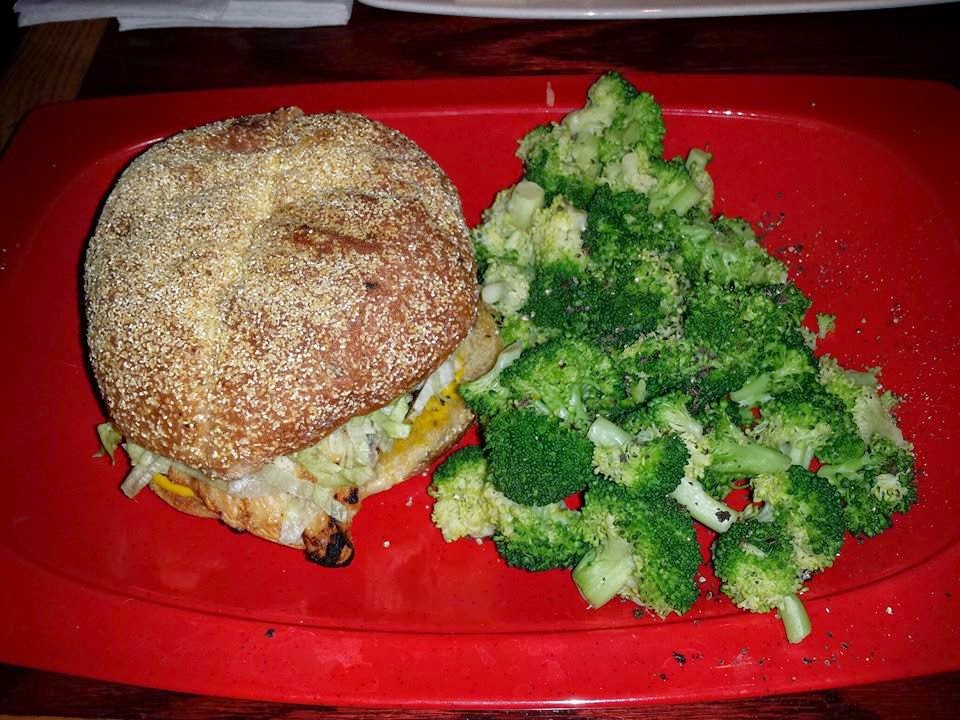 My friend Kyle posted this shot from Red Robin tonight, and not only had I never considered the possibility of a restaurant offering "bottomless broccoli," but I never thought that anyone would ever be interested...  :)  I've actually been sticking to my diet so well over the past month that I'm looking at the SANDWICH BUN with jealousy in my heart.  Okay, yeah, in my stomach... Speaking of people who continue to make strides to be healthy, I guess it's time to explain Jennifer's quote now.  When I read that on facebook, I was like, "WHAT is a DOUBLE-UNDER?!"  I was thinking to myself, "Jennifer Hernandez, is that appropriate for facebook?"  :P  I had NO IDEA what it was...  As it turns out, a "double-under" is a CrossFit thing (yeah, CrossFit, what all the cool kids are doing)...  As Jennifer explained this to me, she said, "I get to do my first real class on Thursday.  I'll let you know if I die or not..."  You see?  My friends..., funny...  ;)  Well, I'm happy to report that Jenn did her first class tonight, and that she is "Not dead!!!"  :D  The following is a text message to my friend Tasha from her mother (who was babysitting), and I was going to share this in a photo, but then I realized that a phone number was showing in the picture...


"Last night your son kept tossing and turning.  He couldn't get comfortable, so he started hitting on Ray, so they started fighting back and forth til he fell asleep.  So around 3:30 in the morning, your son wakes up, he looks at Ray while he was sleeping, and just slaps Ray in the face.  Ray wakes up hollering, "Boy you better stop," and they both roll over and fall back asleep.  Oooooh it was so funny I was cracking up laughing..."


What makes this even more funny to me now is that I had already planned on including it tonight when I watched an episode of 'Mad About You' this morning.  Jamie was just beating the crap out of Paul while they slept...  Yeah, and we'll get to me being off of work this morning in a second...  :)

While we're pondering jobs, let me pick on my friends Carmel and Amy, who live out in Las Vegas. As I'm preparing to move back to the desert this summer, BOTH of these ladies have been on facebook this week, looking to hire people.  Can't you just wait about three months ladies?!  :)

Okay, back to Austin and the University of Texas.  As I said, I didn't have to work today (which is the reason that you're getting this post right now, and not tomorrow).  Due to the classification that I'm under at work, I HAD TO take today off, because I haven't missed a scheduled workday since October (remember that Carmel and Amy, and every other employer in the desert who is reading this post)...  ;)  So it naturally follows that this would be the day that I give you some stories from work.  For starters, in the course of my job this week, I met a woman whose last name is 'Iannuccilli' - I thought to myself, "WOW, that's a cool name, and IMMEDIATELY thought of my friends Verissimo and Castelluccio (you have some competition now ladies)...  ;)  Iannuccilli seemed amused when I told her the story about Verissimo and Castelluccio, and how I said that their names were so cool that they'd have to consider the prospect of marriage very carefully.  And ladies, just so you know..., Iannuccilli married INTO her name...  :)

My job presents me with several interesting opportunities (hey, I met someone with the name 'Iannuccilli'), and one of those occurred a few weeks ago when I worked ahead of the Civil Rights Summit that took place on campus.  As 4 of the 5 living U.S. Presidents were preparing to speak on campus, I got to see some members of the Secret Service up close (I'd like to tell you more, but then I'd have to kill you..., or they'd have to kill me, or something)...  :P  Also, immediately after South By Southwest took place here in Austin, Dave Grohl of the Foo Fighters walked RIGHT BY ME in a building here on campus, and having become a relatively recent fan of their music, of course I had NO IDEA who he was when I saw him...  :P

So Coach, what are we doing besides staying home from work and not recognizing celebrities you ask?...  Well, I knew that it was bound to happen (I did the math), and as I suspected, when Grrouchie got married, my countdown to Las Vegas was indeed under 100 days.  To prepare myself for this, I've been eating better in an attempt to lose weight.  I've also been going through my possessions in an attempt to whittle down the amount of things that I'll be taking with me.  I started the "whittling" process much too late two years ago, and although I don't mind giving things to my friends (they're cool people, as you know), reducing my inventory took way too long.  I was still giving extra things to a friend LESS THAN AN HOUR before I left San Marcos, as I proudly/trepidatiously (fearful of the long trip ahead) showed her my PACKED vehicle (Carmel can testify to this also, as she saw my LOADED SUV)... Very soon I will start seriously surveying the housing and job opportunities in the desert, as I begin making phone calls and filling out applications.  I've been reading my poker books (again) and watching a little bit of sports (SHOCKING), and I'm excitedly anticipating the NFL Draft (I'm an addict) and the release of the NFL and college football preview magazines.  I'm disappointed (as I was two years ago) that I'll be arriving after the World Series of Poker (May 27th - July 14th, and you're welcome) has concluded (along with visits to town by several of my fellow bloggers), but this probably won't be the last WSOP (65 events this year, by the way).

And that's all for tonight.  It's obvious that I have things to do, so have a great weekend and I'll see you on Tuesday!  ;)