Why In The World?

"So when is this old enough to know better suppose to kick in?..." -Brittney Carney-

"Never trust an atom.  They make up everything..." -Woody Paige-

"Do I wanna know, if this feeling flows both ways?
Sad to see you go, was sorta hoping that you'd stay..."
-Arctic Monkeys- (Do I Wanna Know?)

"Compliment people.  Magnify their strengths, not their weaknesses..."
-via Training Truths:  The Good, The Bad, The Ugly- (facebook page)

"Everything that seems obvious was once obscure..." -Doyle Brunson-

Brittany:  "Happy MCM to two of my absolute favorite and most handsome heartbreakers..."
Coach:  "I just learned TBT - what is MCM?"
Brittany:  "Man Crush Monday!  Keep up Coach...  ;)"
-Brittany Flores-


Good evening everyone.  Yeah, I know that I'm throwing you off with another early post.  I figured that I had to mix up my game after Brittany told me to keep up (which is by far my favorite part of that exchange above)...  :)  Since Brittany brought up man crushes and it is Monday, I thought that I'd include of photo of myself playing poker... 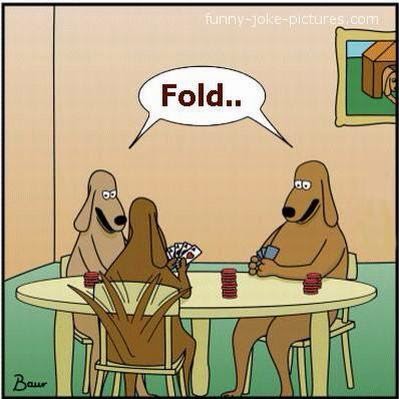 Yeah, I have to work on not giving away my hand...  This cartoon does remind me of a hand that I played in the WinStar poker room in Oklahoma however...  Now let me preface this by saying that I think that I'm usually pretty tough to read.  If I'm involved in a hand, I won't talk, and once we go to the flop, I will sit with my left hand covering my mouth, while I pose stone-faced, wearing my shades.  Well, as I'll do from time to time, I'll watch the other players as the flop hits the board (looking for their reactions) as opposed to watching the cards.  In this case I held 10's, and 5 of us saw the flop.  After watching everyone's reaction to the board, I looked down to see 10 x 10, and in a moment that was very uncharacteristic for me, my throat emitted the most suspicious, guttural noise that you've ever heard...  I tried to play it off by coughing afterward, like something had gotten stuck in my throat while swallowing (like an elephant), but although I was first to act, 4 players proceeded to check behind me on the flop and the turn, and when I bet out 10 (into a pot of 50) on the river, they all folded FAST...  Okay, so maybe I should take up something else, like golf...  This photo and caption from my friends David and Scott sums up my golf game PERFECTLY! 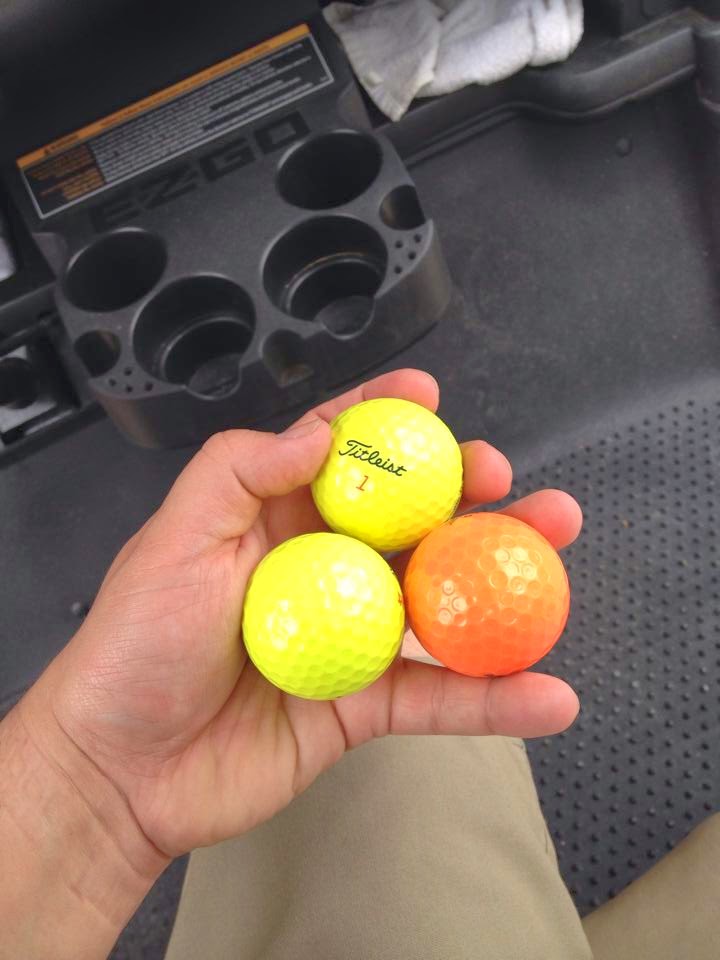 The accompanying caption was, "Ready to start another Easter Egg hunt!!!"  :D  Ask my brother Pete if you don't believe me - I'm not much better at betting golf than I am at playing the game, which says a lot...  :P  However, as often as I see David and Scott posting on facebook about their outings, I'm positive that they could find these Titleists...  Speaking of colorful things, our favorite Texans fan Alyssa is making her triumphant return to the blog tonight... 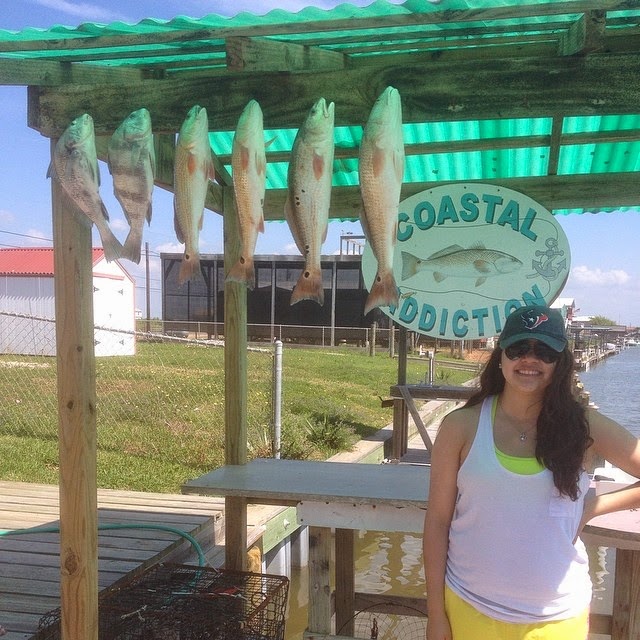 Note the Texans cap - SOOOO predictable...  :P  Alyssa obviously had a successful Easter Weekend fishing outing, reeling in these Black Drum and Redfish (you didn't think that I was referring to Alyssa as being colorful, did you?)...  ;)  Knowing Alyssa, I'm sure that there is a nice little fish market nearby that sold a pair of Black Drum and four Redfish shortly before this picture was taken...  Okay..., in all honesty, this is more fish than I've ever caught in the ocean (by about six), but Alyssa will always be in my debt for teaching her how to peel crawfish...  :P  Nice catch Alyssa...  :)  And since we're on the topic of colors, let's talk about the Orange and White Scrimmage... 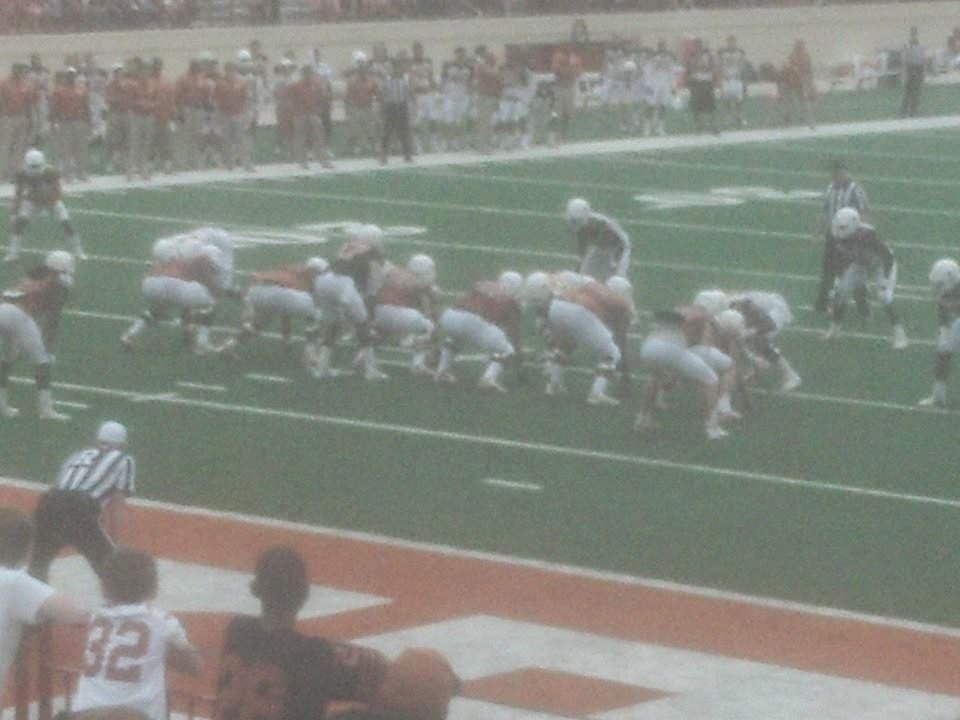 Yeah, Coach got out of his apartment on Saturday and took the twenty-minute stroll over to DKR to watch the Texas spring football game.  This shot was taken from the eighth-row of the endzone, which was my original seat at the game.  Just before halftime, I moved to the other side of the endzone, and let's talk about THAT...  :P  I'm now sitting in the first row of endzone seats, it's the last play of the half, and the ball is at midfield.  The quarterback is scrambling to his right, and he heaves a prayer toward the promised land.  As this ball is in the air, this very educated fan sitting to my right screams, "WHY IN THE WORLD WOULD HE THROW THAT?!  As my eyes roll while I'm thinking, "well..., it's the last play of the half..., the ball is at the fifty..., may I phone a friend???," this goofy-looking, awkwardly-rotating DUCK OF A PASS manages to navigate its way through triple coverage and into the arms of a diving wide receiver just beyond the goal line - TOUCHDOWN!!  Life was very good at that moment...  :P

Speaking of sports, these are all of my current prop bets on the NHL and NBA playoffs (if you want something to root for or against)...

NHL - To Win The Stanley Cup


All of the bets other than the Spurs prop are for $1.00, and are obviously based on their value/hedging value.  If you're unaware, I'm a Spurs fan, and although I'm very concerned about our age and susceptibility to injuries, I'm hopeful that we can make one more last run (and one more the year after that, and so on)...  Don't get me started on the quality of the Western Conference or the cupcake-like quality of the East...

Now let's take a moment to send our best wishes to our friend and fellow blogger Grrouchie (www.grrouchie.com/) as he will be getting married very shortly.  I may or may not post again before his wedding, but I've been so unpredictable lately, who really knows???  ;)  Remember, when in doubt, ALWAYS support the Steelers fan...  :D

I have a little hockey and basketball waiting for me right now, but I'll post sometime on or around Saturday...  Until then, have a great week!