"Even the bravest of creatures have some fears, but it is not enough to stop them from moving in the path they are destined to walk upon..." -via Training Truths:  The Good, The Bad, The Ugly-
(facebook page)

"All my friends are getting engaged/married and having babies and I'm just over here like, "I really love tacos"..." -via Jessica Johnson-

"Just scanned a baby from India and ssshhhhh'd my way through the whole exam.  Calming babies has no language barrier..." -Sara Hawkins-

"I tried to eat healthy today..., then my son wanted pizza..." -Belyne Gonzalez-

Good afternoon everyone.  Yeah, it's not Saturday - your guaranteed money-back refunds are in the mail...  ;)  We're going to start with sports today (to get it out of the way Miletus).  Let's start with golf, because that's what I'll be watching today.  When I returned home from work yesterday (more about that shortly), I looked at the proposition (prop) bets for the Masters golf tournament. At the time, Bubba Watson had a 5-stroke lead (at -8).  Due to that, he was a 1/1 favorite to win the tourney (win a dollar for every dollar that you bet).  However, the oddsmakers were giving the rest of the field really long odds, so I decided to jump on some of the underdogs (it was still early in the round, leaving the majority of two rounds to play - yesterday and today).  Over the years, I have seen many leaders in major golf tournies unravel, so I bet a $1.00 each on the following golfers to win the Masters:  Speith 9/1; Furyk 15/1; Senden 28/1; Fowler 16/1; Bjorn 25/1; Jimenez 25/1; Blixt 33/1; and Stadler 40/1.  What happened basically is that I skipped over Watson and Matt Kucher (who was only paying 6/1), but I then took every other golfer who was at -3 at the time. This is what the leaderboard looks like right now after yesterday played out...

There are a couple of others at -1 right now, but you get the point.  All 8 of my golfers are on that list right now, so if I can fade Watson, Kuchar, and Westwood, and get one of my picks in that green jacket, I'll have a very interesting day for only an $8.00 investment.  This is a lot like my little NCAA Tourney experiment, but just more condensed...

Speaking of that investment, this is the follow-up for those of you who have stayed tuned.  If you haven't, I bet a $1.00 on 12 different teams to make the Final Four, and another $1.00 on each of those 12 to win the national championship (at different odds, much like the golfers above).  Long-story short, Kentucky was my little angel, paying 12 to 1 to reach the Final Four, and 33 to 1 to win the title.  When the experiment began, I had $48.00-ish bucks in my Bovada account, and obviously $24.00 and change left after making the bets.  Having the long odds allowed me to hedge (bet against myself) to ensure making some money once the Final Four and title game approached.  I lost like 4 bucks betting against the Wildcats in a hedge in the 'Elite 8' - however, I bet 13 bucks on UConn in the title game.  Again, long-story short, I ended up with $55.78 in my account after the tourney ended, including the other little bets that I made in the meantime.  I was just over $57.00 when I made those 8 bets yesterday, so send me your good karma and let's enjoy some golf today!  ;)

So how can I lay around and watch golf all day you ask (other than my MASSIVE investment in the tourney)?  Well, for the last four days at work, I was doing inventory.  Now numbers, and counting, that's pretty much right up my alley, but after four days on my feet...  I'm not doing JACK today...  And I did A LOT of counting...  Belyne's quote up top was very relevant to my diet yesterday also.  I've been doing very well watching what I eat, avoiding the bread and the sugar and the fatty foods.  WELL, Wednesday through Friday were just "normal" work days, where we took inventory, then ate the lunch that we brought, and then counted some more.  HOWEVER, yesterday we received the help of about a dozen current Longhorns to help us in finishing up the counts.  Since they enlisted the help of the college students, they decided to provide us with breakfast and lunch, along with drinks.  SOOOOOOO, yesterday Coach ate 2 breakfast tacos, 4 slices of pizza, and had 3 cokes.  HEY, it's against my nature..., and it goes against everything that I believe really, to turn down FREE FOOD...  :P  So yeah, I'll just be laying around today, and eating more healthy, and watching a lot of golf...  :)

I'm still preparing to move back to Las Vegas, and I think about it every day.  I thought that I knew about sports before (you know otherwise of course), but I'm going to be putting in a SICK amount of studying for this little sports betting venture that I'm about to embark upon.  I'll PROBABLY show up in a poker room or two along the way also, but I'm going to be an extremely well-informed bettor, you can count on that.  Oh yeah, here's another photo of Las Vegas for you... 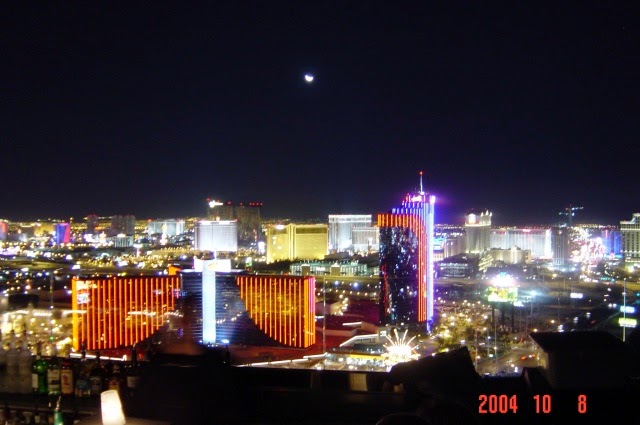 Well, it appears that the golf is underway for today, so you're spared from further torture (for now).  Have a great Sunday and I'll see you again on Tuesday!