We Have The Yellow Ones

"The most exciting thing about buying a new shirt is being able to go home and cut it up the way I really want it..." -Casey Castleberry-

"(My son) caught a fish today but is mad because he couldn't bring it home as a pet!"
-Monica Rodriguez-

"I asked for a lemon in my Dr. Pepper this morning and the teenager taking my order said, "We have the yellow ones, is that okay?"..." -Kristen Atwood-

"Hahaha...the ultimate AdHd move...mascara on only one eye!!!  Lol...really bad noticing it when already on the road!!!" -Patti Thompson-

"STOP WAITING FOR FRIDAY, for summer, for someone to fall in love with you, for life. Happiness is achieved when you stop waiting for it and make the most of the moment you're in now..." - via Training Truths:  The Good, The Bad, The Ugly- (via facebook)


Good evening everyone.  Well, I decided to stay in on this Saturday night (just for you - okay, that's not true at all), so you're getting this late Saturday evening post ('Saturday Evening Post' - get it?  Ba ha ha)...  ANYWAY, let's begin tonight with a common theme.  This short conversation took place on facebook last night with my friend Emily:


Five months boys and girls - that's when I intend to be back in the Mojave Desert.  Although I may or may not return (though I'll most likely return) to Las Vegas at the end of July, I can give you my reasoning for PROBABLY being back by then, even though I might not have quite as much money saved up by that point as I'd like.  My train of thought is very similar to that 'Training Truths' quote above (no pun intended with 'train of thought'/'Training Truths' - it was very convenient however, wasn't it?)...  ;)  ANYWAY, I can save up money for another year, etc..., before moving, but I want to be back there NOW!  Well, we can go into this in-depth before August.  Let's see..., 22 weeks, and 2 posts per week...  That's about 700 more posts before the end of July...  700 - my math checks out, right???  ;)  If I haven't mentioned this already, all of this recent staying at home seems very ironic to me, because I plan on being in sportsbooks and at poker tables as much as I can stand in about five months.  From non-social to SUPER SOCIAL in no time...  :P

Okay, now it's time for some football (a subject that's been sorely missed here for about a month)...  :(  My friend Monica shared some good news about my alma mater on facebook today. Even if I do return to Las Vegas as planned, I'll still be able to see the Texas State Bobcats play at least once this season, as they'll be on t.v. on Tuesday, October 14th.  The Cats will be battling Louisiana-Lafayette that evening (well, I hope that it's a battle, because it was an UGLY GAME in Lafayette last year).

Speaking of cats and football (wow, I actually was this time), my friend Krista posted a couple of pictures of facebook today... 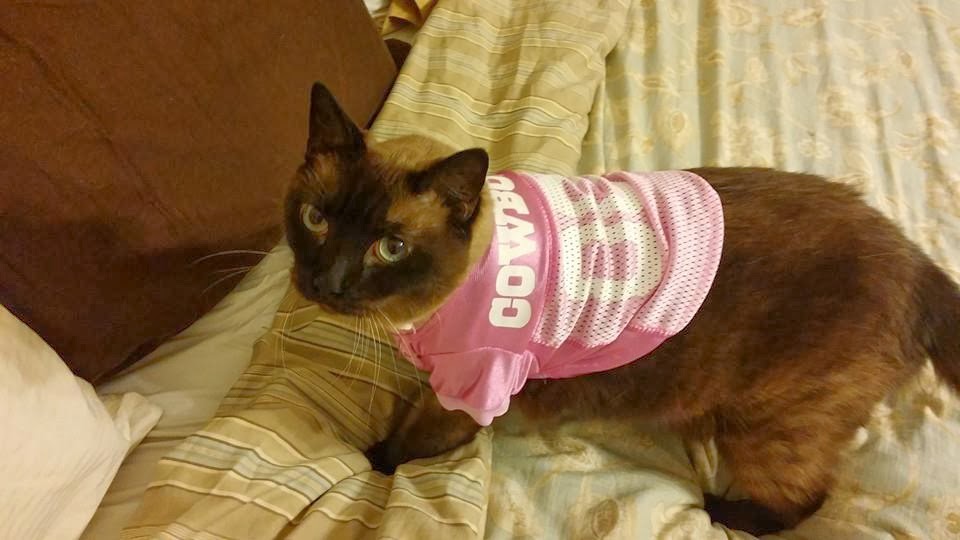 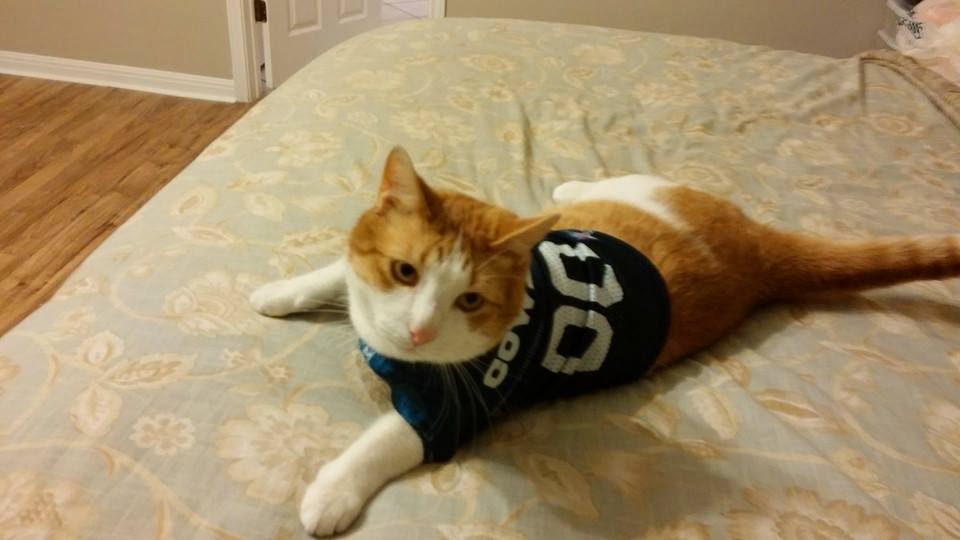 Speaking of sports, and the fact that I've been foolish enough to stay inside on a day when the high hit 81 degrees (and it's supposed to be THIRTY degrees here on Monday morning), a couple of my friends in San Marcos posted pictures from the ballpark... 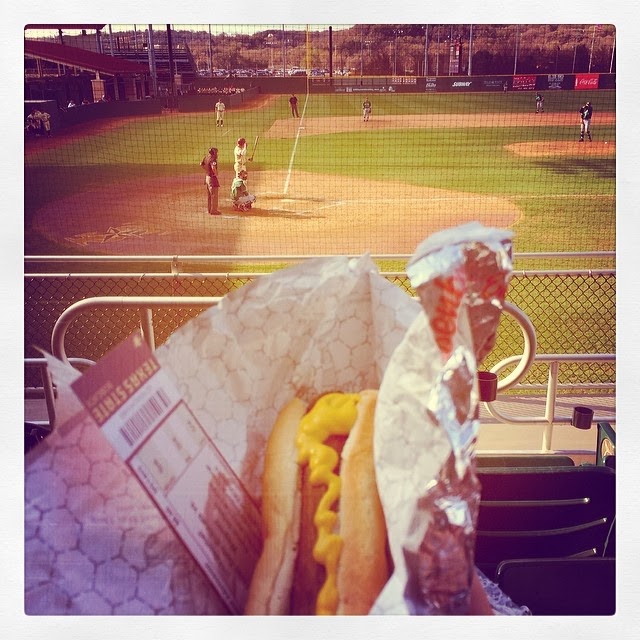 This gem from my friend Lindsey came with the caption, 'March is here..."  Pretty much as close as you can get to being art for a photograph, huh?  Later on, I saw a follow-up from my friend Austin, as they're evidently playing two today... 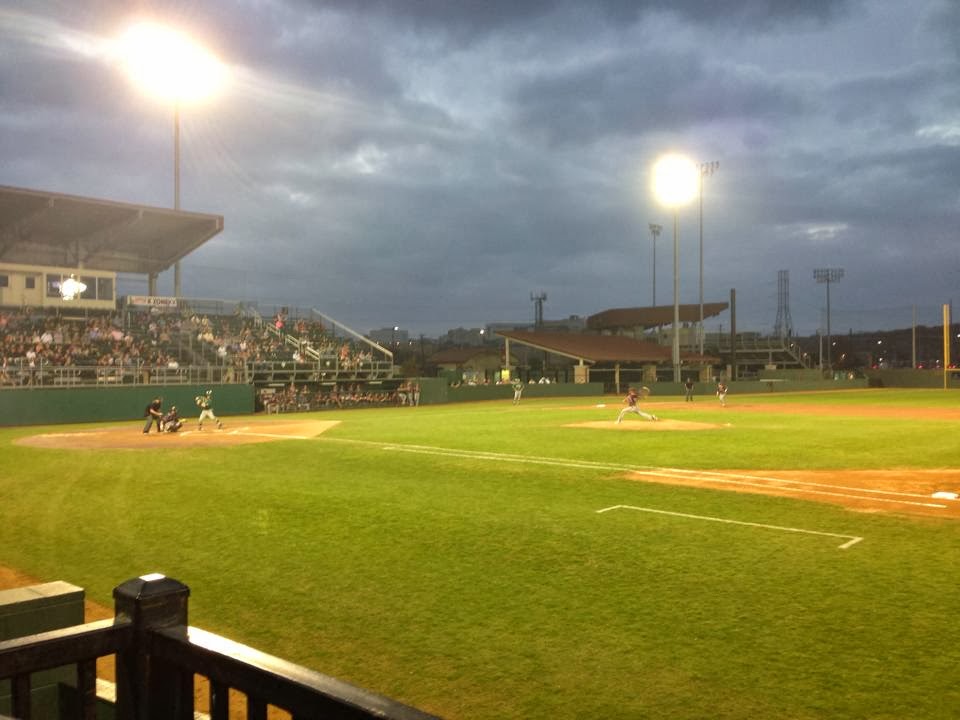 Probably the thing that I dislike most about the desert - it seems like it's a million miles away from San Marcos, America...  If I could live in one of those apartment complexes up on the hill behind campus, and then find the Las Vegas Strip on the other side of campus, and still have the river - WOW, that would be sweet...  ;)  I'm not sure what we'd do with the Square, but I don't have the time to deal with this - I'm not a city planner...  :P

And now it's time for our weekly sports predictions.  Wait, what's that?  OH, it seems that Joey has been SUSPENDED this week because his alma mater (New Mexico State) started A BRAWL with Utah Valley State.  You probably saw the highlights on ESPN's Sportscenter - right as the game was ending, and fans started rushing the court, an Aggie hurled the basketball at an opponent...  Okay, well the brawl part is true, but Joey is actually vacationing in New Mexico this week, and THAT'S WHY we don't have any predictions from him.  However, I knew that you'd miss him, so here he is with his massive plate of lasagna...  ;) 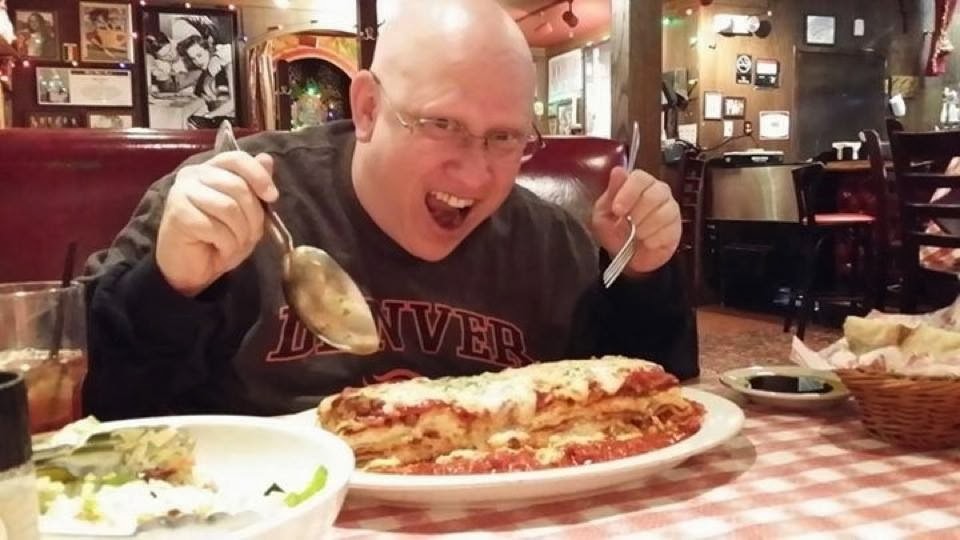 
Okay, I know what all of you have been wondering...  "Coach, where is your obligatory Las Vegas photo for this entry?"  The photo below was taken after I completed the Las Vegas Marathon (100 years ago).  At the time I did this marathon, the course started south of the city, and NEVER reached the true Strip.  Now they run the thing down the Strip at night I think - GRRRRRRRR... Anyway, I was out of shape, and although I finished the marathon (OF COURSE, duh!  ;)  I've finished all three marathons that I've entered), I was out of shape and EXHAUSTED!  I believe that my brother took this photo of me receiving my complimentary massage as I was about to DIE... SOOOOOO, the reason that I have no predictions for you tonight is that I made a bunch of small bets at Bovada today, and then TOOK A NAP this afternoon, and now all of the games have been completed.  However, my picks did go 3-4 today (if you're curious), and YES, I was the one who totally jinxed Kentucky, betting them to cover (-9).  The Wildcats lost outright at South Carolina... However, this is my photo, and my results for last week... 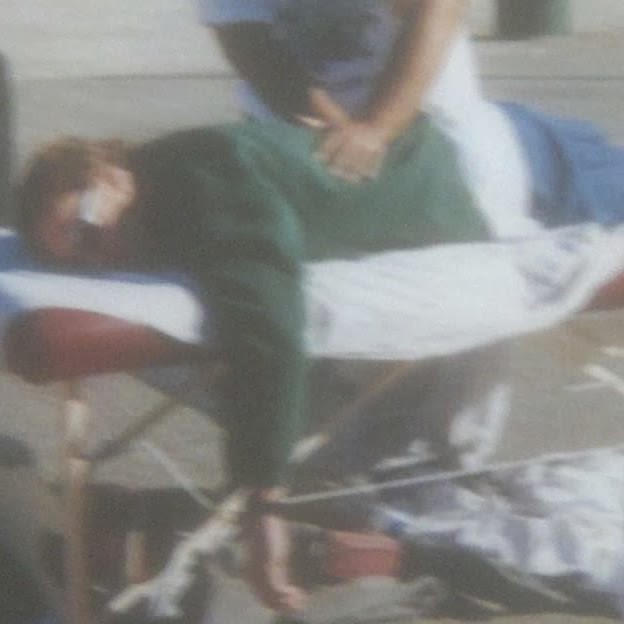 
That's all that I've got for tonight, but I'll be back to bother you again on Tuesday...  Have a great weekend!