"Breaking News:  The Oakland Raiders have officially agreed to a 10-year contract extension with 4th place in the AFC West..." -via James Pruett-

"Staying in a situation where you're unappreciated isn't called loyalty - it's called breaking your own heart..." -via Destiny Perez-

"Between toddler hands and cat paws, when I'm in the bathroom, one of them is always under the door..." -Carly Schamber-

Good morning everyone.  When I posted this as a short entry yesterday, it was titled something about basketball picks.  Joey isn't going to be picking any games this weekend, but he will be back here with me on Wednesday, when each of us gives you our five favorite bets for the Thursday/Friday set of games in the NCAA Men's Basketball Tourney.  Make a note of that:  There will be no Tuesday post this week, OR the Tuesday entry will be made on Wednesday (whichever makes you happy)...  :D

I made seven bets today.  I decided to give you all 7 instead of just 5 because Louisville to win (taking the moneyline) seems like an easy call.  However, I am "counteracting" that selection by giving you two underdog moneyline picks. These are my "baby bets" for today's games...

I posted that little section above with the basketball bets earlier, and I ended up going 5-2 on the day.  I hit on both the UCLA and Providence games (nice paying underdogs), so I easily came out ahead for the day.

This is my current record for the year, after today's bets... 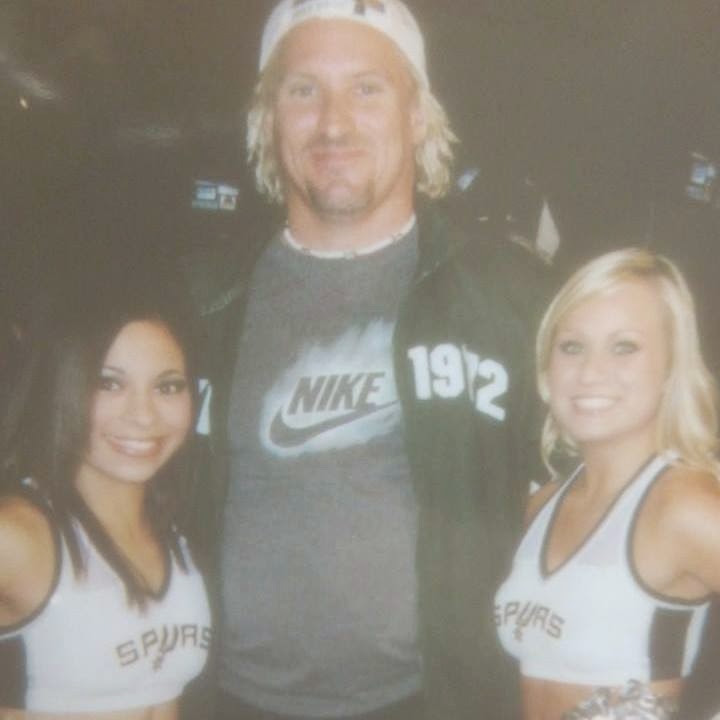 You know what?  The heck with that...  I'm calling a blog audible.  The next time that Joey and I make picks here, it will be for the NCAA Tourney, and it's going to be that way for about three weeks.  I'm kinda tired, and I don't want to look up all that stuff, so there's a picture of me... 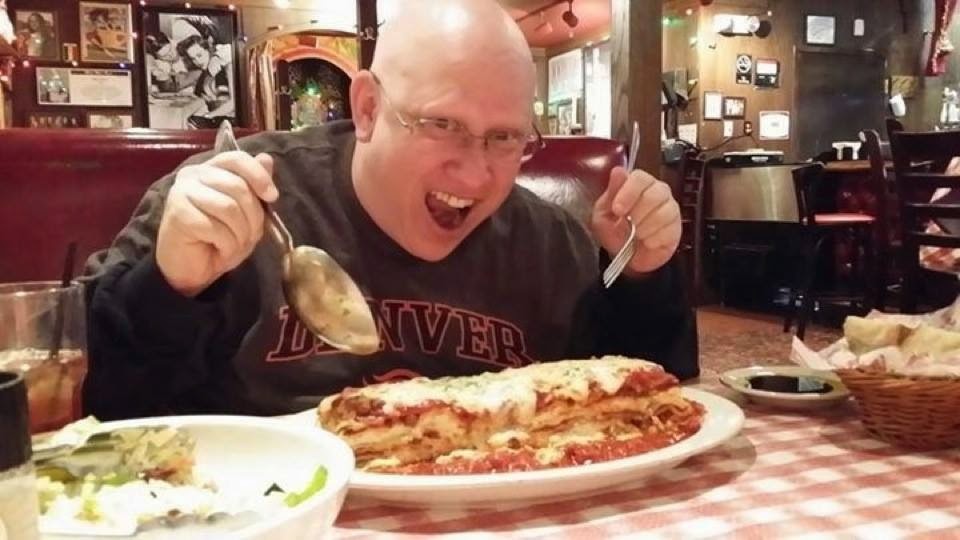 
Let's talk about my upcoming diet instead - I REALLY NEED TO lose weight...  Thanks to my friends Leanne and Francesca at 'Training Truths:  The Good, The Bad, The Ugly' on facebook, I have a simple photo of my new diet... 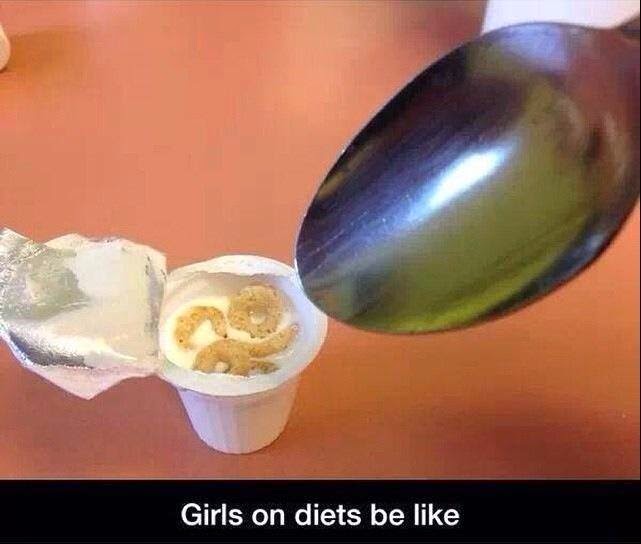 Three times a day..., you'd have a hard time arguing that this diet wouldn't be effective...  ;)  Okay, so that probably won't be my diet, but I am going to lose weight.  This goal of losing weight got off to a stellar start yesterday as I met my brother Pete and my dad for lunch at the Texas Roadhouse at Southpark Meadows.  I shared the fried pickles appetizer with Pete, and then proceeded to eat what I ordered:  A baked half-chicken, a loaded baked potato, and a garden salad with ranch dressing...  If you've never been to the Texas Roadhouse before, take a second to make a mental note...  This "half-chicken" that we're speaking of is almost as big as the rotisserie bird that you'll find at your local supermarket.  I was STUFFED!  Just as I typed that, I clicked on facebook (because that's something that I'd do), and my friend Yvonne just made this her status:  "Taco Bell, popcorn, and pickles...  Watching 'The Dallas Buyers Club'..."  Yeah..., dropping down to about 215 pounds from 6,000 pounds is going to be a piece of cake (or maybe it's going to be something that ISN'T food-related)...  Of course if I exercised, that would help.  My friend Carrie tagged her sister Brittany to a facebook status earlier this week about an upcoming 5k, called 'The Color Run.'  Brittany commented on Carrie's status as follows...  "The name isn't as cool as 'Color Me Rad,' but I'm down..."  And you see people, that's the key..., to find events involving exercise that have cool names...  ;)

And speaking of birthdays and statues ("Coach, you really weren't talking about either - what's wrong with you?"), I saw on facebook today that it is Statue Calliope's birthday weekend!  That's a coincidence, since I saw my friend Casey in a photo that she posted earlier this week posing with someone that looks eerily like... 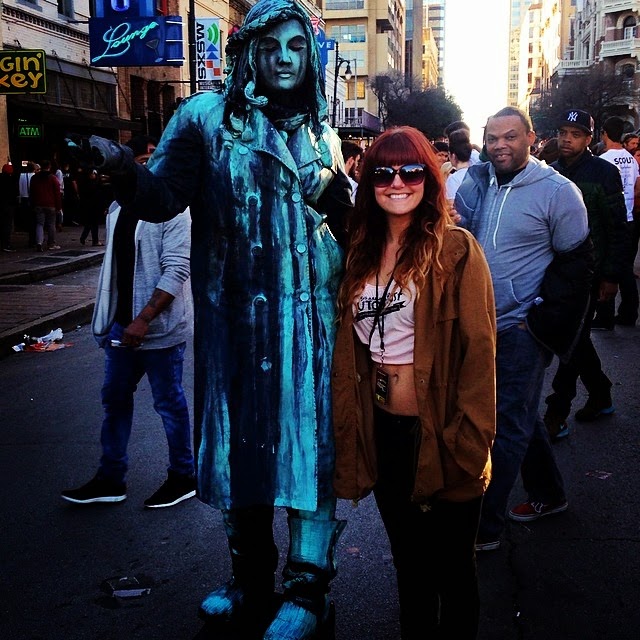 Is that..., could it be..., Statue Calliope???  Anyway, Happy Birthday Calliope, and congratulations on making the blog Casey!  With the 742 SXSW photos that Casey has posted recently, I'm SHOCKED that she found her way into the blog...  :P

Okay, so why am I home on a Saturday night again???  I really haven't felt that great this week, but I'm starting to feel better now (and it's actually Sunday morning now, if that makes me being here seem less pathetic)...  #notlikely  I am having SERIOUS Las Vegas withdrawals tonight (this morning), so much so that I went to the 'Bravo Live' poker application earlier, only to learn that there are A LOT of poker games in Las Vegas tonight (today, whatever)...  One minute I'm wondering if these 4 1/2 months are EVER going to pass, and the next I'm wondering how I'm going to get everything done in 4 1/2 MONTHS!  Okay, I guess it's time to go dine on my four Cheerios in coffee creamer...  Enjoy the rest of your weekend and I'll see you again on Wednesday (NOT Tuesday, but Wednesday)...  Have a good one!