"It's about bettering yourself and not degrading others..." -via Domonique Gilbert-

"I want to hide the truth, I want to shelter you, but with the beast inside, there's nowhere we can hide..." -Imagine Dragons- (Demons)

"When you love someone but it goes to waste..." -Coldplay- (Fix You)

Good evening everyone.  Okay, maybe the title of tonight's post is a little bit dramatic (but it's probably true)...  I'm in a fantasy football predicament tonight where I'm facing Tom Brady, the Carolina Panthers' defense, and Panthers' tight end Greg Olsen (just for good measure)...  The absolute best thing that can happen for me is for the Patriots to score RUSHING touchdowns (which would subtract points from my opponent without giving any to Brady).  The worst thing that can happen is for Carolina's D to score any touchdowns, and the same goes for Olsen.  Brady scoring TD's would be offset by the points that the Panthers' D would lose.  I currently have an 11-point lead under the ESPN format, and this is going to be a LONG GAME...

In addition to the quotes above that I stole from my friends, I've also snagged a photograph (evidently I've run out of pictures of the Chi O's).  Oh, speaking of them, they were no help on my '10 Best Bets' either (currently 3-5-1 at this point, and I have Carolina (+2 1/2).  Okay, back to the snapshot, check this out... 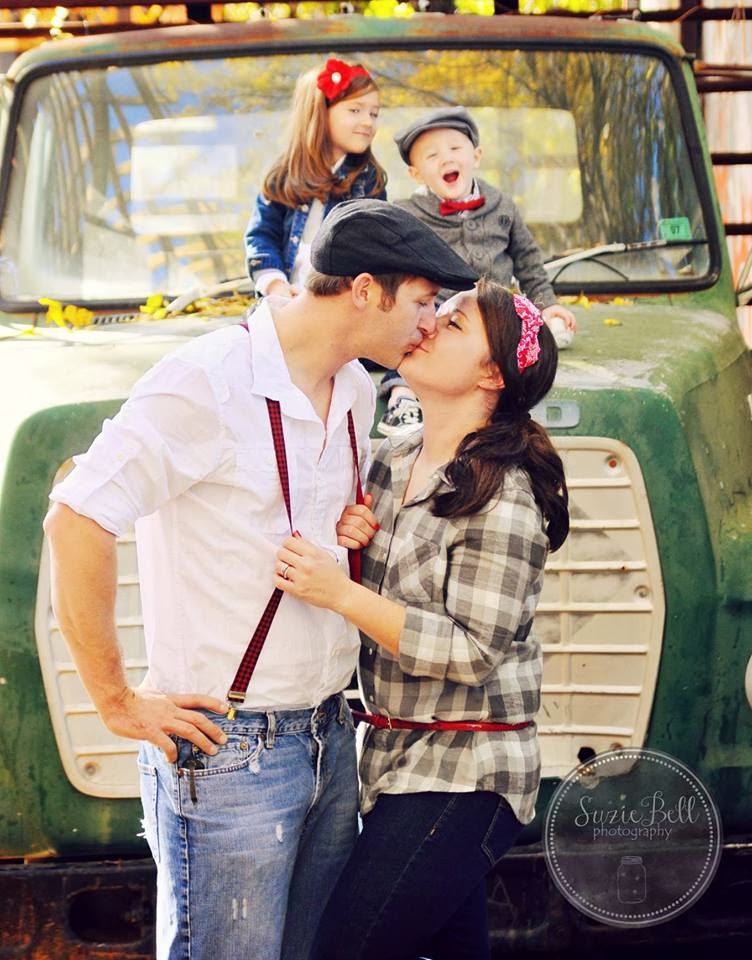 Now the happy couple is a pair that I met back when they were middle school students (remember, I'm 100 years old), and I want you to take a close look at the faces of their children in the background - PRICELESS...  :D  Great photograph!

Oh, let's not forget - field goals by the Patriots are good for me also (the score is currently 113-99 me)...  #longgame  I did not end up playing any poker this weekend, so it's unlikely that I'll have a poker post for you this week.  My Saturday was occupied by the Texas loss to Oklahoma State, and I was actually so tired that I didn't take advantage of the party that was downtown Austin this weekend.  The Horns' home game was coupled with a Formula One race that was held in town on Sunday, and this meant A LOT of people and music and festivities throughout the downtown area.  Poor, poor 100 year-old me (sometimes I use the hyphen, sometimes I don't - I figure I'm right about 50% of the time) stayed AT HOME on Saturday night, and actually fell asleep before midnight (GASP!!!).  AND THEN I took a couple of NAPS yesterday on top of that...  This HAS TO BE the most interesting blog on the net, huh?  ;)

The one positive thing that happened football-wise this weekend (well, other than the Steelers victory) was that I took the lead in Lucki Duck's pick 'em contest.  I have a "commanding" 5-point lead with 5 weeks to go.  If I'm not mistaken, I don't believe that I've selected a losing team during any of the twelve weeks of the contest to this point, and we all know that just typing that guarantees that I'll lose this week...  ;)  The goal of the contest is to pick the one team each week that you think will win by the most points.  The sheet of paper on my wall where I track all of my football endeavors looks a lot like Jacksonville's schedule when it comes to this contest - I have picked their opponent A LOT this season, although I took Seattle over Minnesota this yesterday.  In the 'Small Potatoes Poker and Sports Betting' blog to the right, you can find the updated standings in this contest.  I've never won anything in my life (total lie), so I'm looking forward to seeing if I can hang on to win a t-shirt or sweatshirt of the team of my choice.  I'm hoping that Mr. Duck brings me a Steelers sweatshirt for the new year...  :D  If I can somehow hold on to win the contest, you can bet your last dollar that there will be a photo of THAT appearing in this blog...  ;)

Okay, it's time to glue myself to the t.v. once again as the second half has begun, so have a good one and I'll see you again on Wednesday!