"While everyone is cheering for the USA in the World Cup, I'm over here liiiiikeee, "So how 'bout them Angels?"  Oh, wait, I'm unfamiliar with baseball too..." -Khrysta Green-

"Speak your heart.  If they don't understand, the message was never meant for them anyway..." -Yasmin Mogahed- (via Francesca Welsh)

"I'm not sure what I'm cooking, but it sure smells good..., and that's all that matters..."
-Trisha Whitworth-

Good evening everyone.  Five weeks til the desert...  I'm sorry, I want to be writing about what I'm actually doing in the desert even more than you're sick of reading about my countdown...  ;)  I'll offer you an olive branch in the form of a photo of Fremont Street... 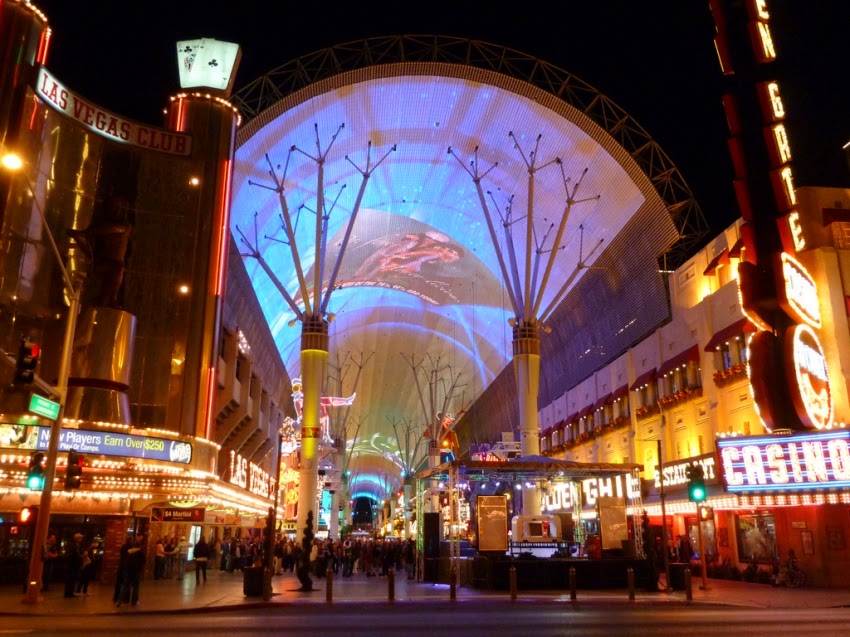 Not a particularly eventful night at the apartment tonight, as I sit here watching the NBA Draft, which registers nowhere near the NFL Draft on my radar.  I watched some of the U.S./Germany soccer match today on my break at work.  I failed to bring up in my most recent post here how I believe that the U.S. team got a huge pass from the media for giving away their last game (and a ticket into the knockout round) in the final minute.  I'll be the first to admit that I'm no soccer expert, but it seems to me that you might want to have some defenders back when you hold a one goal lead in the final minute of a game where a victory will propel you into the next round of the Cup (but that's just me I guess)...  I also found it very hypocritical for the U.S. manager to say before the World Cup began that we shouldn't be expected to win the title (I don't have his exact quote, and I'm not going to look it up, but that's the gist of it), but then after we advanced to the next round today, for him to be saying, "no one gave us a chance..."  Hmmm...  These are my World Cup futures bets (to win the title) that still have life ($1.00 each)...

I do promise you that we'll be talking about football again in the very near future.  Phil Steele's college football preview magazine is supposed to be on the newsstands already (I usually pick mine up at WalMart), but I'll wait until this weekend to look for it.  The draft is now over and I have to work tomorrow, so I'll see you again sometime over the weekend.  Have a great Friday!