"Are these times contagious?  I've never been this bored before..., is this the prize I've waited for?..." -Collective Soul- (Run)

"Looking at you, holding my breath, for once in my life, I'm scared to death, I'm taking a chance, letting you inside..." -Lifehouse- (First Time)


Good evening everyone.  I'm sorry that I didn't post yesterday, but I had a good reason, and in spite of the silly title of tonight's post, it's full of substance.  If you're feeling jilted that I didn't publish yesterday (I'm SURE that you are), you'll be interested to learn this:  I didn't watch one second of last night's Cowboys/Bears game, and I didn't miss it at all...  :)  The game didn't even cross my mind while it was being played, but for those of you who did stop by for a little football, here you go...  My fantasy team is up 127-94 after the first week of its 2-week playoff.  Adrian Peterson scoring one fantasy point and Reggie Bush getting shut out definitely hurt my opponent... Somehow..., inexplicably..., for some reason beyond our understanding, my brother won the Bobcat Nation Sports Bar & Grill's football pick 'em contest for the second time in three weeks. The $25.00 tab came down to just the 2 of us again, as I trailed him by 1 win entering last night's football game.  I picked the Bears to win, and he picked the Cowboys, which brought us to the tiebreaker.  I'm not sure what Pete's total was for the game, but mine was 38, and Chicago and Dallas combined to score 4,000 points, leaving me as the runner-up...  This is the third time that Pete has won the weekly contest this year, which equals my total.  I'm ECSTATIC that I talked him into participating...  Congratulations Pete!  ;)  As for Lucki Duck's weekly contest, I believe that my picks are still unbeaten for the season, but my Patriots selection BARELY ended up being victorious.  This allowed some of the pack (namely my friends Lightning36 and Memphis Mojo) to gain on me, and now I'm going to have to actually try in this contest...  ;)  Footsteps - PFFFTTT...  :)  We'll just wait until Football Friday to address my weekly Ten Horrific Bets...  #enoughsaid

Now onto more important things...  A friend of mine told me a while back that she was going to be visiting town in early December, and that there was a possibility that we would be able to see each other and catch up.  This was good news considering that the last time that I had seen her was about (c'mon..., you know this one...) 100 years ago...  She graduated from high school the year after I did, but you wouldn't know it by looking at her.  It's almost a crime that Vicki didn't get carded in San Marcos, America.  Yeah..., that's right Harper's - I WORKED there, and I was carded this fall, but you didn't card her???  Okay..., MAYBE it's because Vicki was with me, and the new guy recognized me now...  :)  Oh, and did you see how I kinda glossed over that..., how I went left the path that I was on?  NOT ONLY did Vicki agree to visit San Marcos with me, but she did so on the evening of the same day that she woke up at FOUR IN THE MORNING to travel across the country - yeah...  #reallycool  She is only the second person from my high school that has seen San Marcos (at least that I know of, and with me for sure), and not only did she make the late night trip, but she also bought us dinner, at Pluckers...  Before we dined though, we did take the time to pose for this photo at our own personal 'Sights and Sounds' on the Square, because the actual Sights and Sounds was just too far away, and it was just TOO COLD... 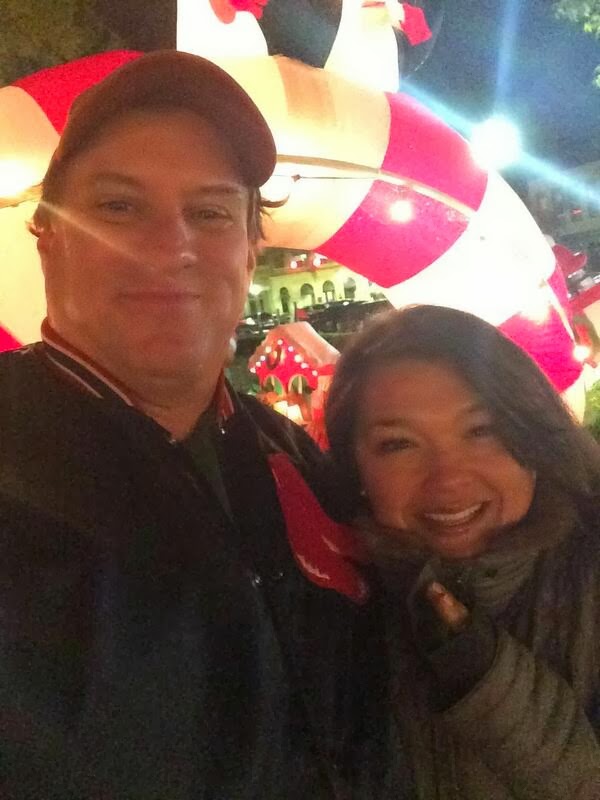 Now who looks like they rested at home all day, and who looks like they traveled across the country???  :)  So after arriving back in the ATX well after midnight, we were naturally at a bike shop early the next morning renting some wheels (okay..., well..., it was only two wheels, because I don't believe in showing people up)...  ;)  Due to the bike shop opening a little bit later than we had anticipated, we had the opportunity to tour the city a little bit both before and after getting Vicki set up to conquer the ATX on two wheels.  And yes, if you're keeping score at home, this is TWICE that Vicki found time in her schedule to hang out with me during her visit.

And that brings us to last night, when I shunned my loyal blog readers (all two of you) as Vicki AGAIN agreed to visit with me, and AGAIN bought dinner for me.  What did I do to deserve this good karma, right?  :)  I think that the thought of torturing me appealed to my friend just a little bit, as we had previously had a chat about "weird foods..."  We found a little Vietnamese pho place on Guadalupe ("the drag") to dine.  Okay, before we get to the foods that I tried for the first time, let me start by saying that I had never been to a pho restaurant.  Pho is a Vietnamese noodle soup, and at least at this particular establishment, a small bowl meant that the bowl was small..., in comparison to say..., a small SWIMMING POOL...  :)  Also (and I am not making this up, you can ask Vicki), the menu and the walls were adorned with the phrase "Go Pho It..."  Again, you can't make this stuff up...  ;)  Two of the foods that Vicki was able to add to the VAST LIST of cuisine that I've now dined on were seaweed and squid.  She snapped this photo of me before I tried the seaweed... 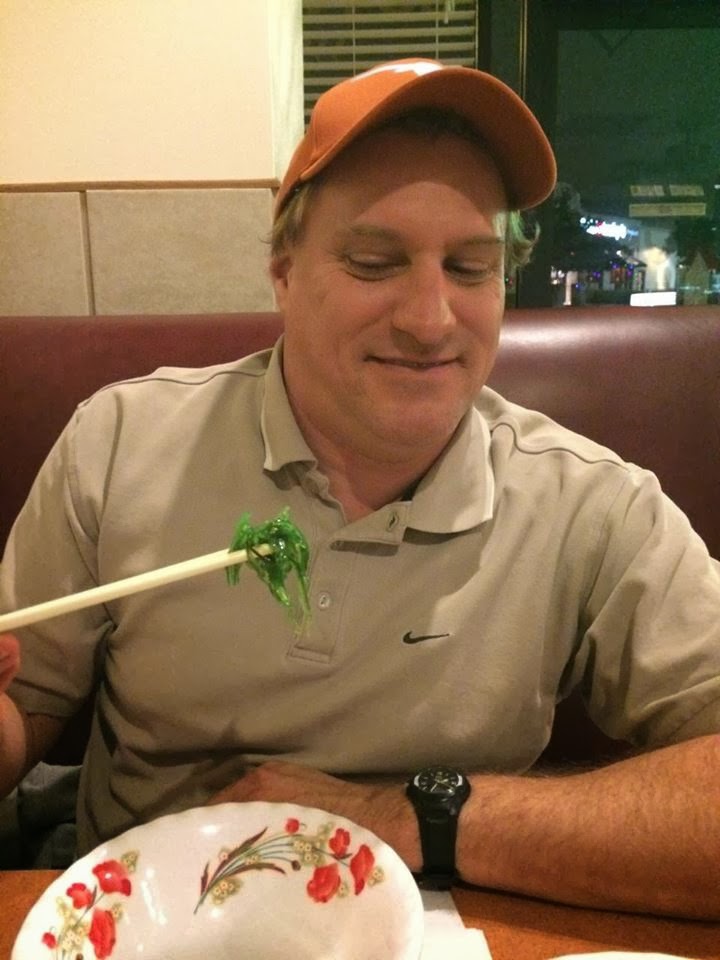 And yeah, there were only about three little seaweedlings (it's a word, maybe...) on those chopsticks before Vicki made me pick up some more...  :)  For the record, I dined on plenty of seaweed and squid during the course of our meal, and the one thing that they had in common was that they were both really chewy...  :)  And yes, I did manage to eat the seaweed without drenching it in ranch dressing (probably because there wasn't any ranch dressing to be found - just kidding Vicki)...  :)  Our finishing a really good meal, we then had the opportunity to tour the downtown ATX and its immediate surroundings some more, this time under the stars with the city lights shining.

For me personally, Vicki's visit was extremely well-timed, as I got the opportunity to spend over 3 hours with her for 3 consecutive days.  The time just flew by as we caught up with each other, and I got to know Vicki better than I did in high school.  I don't recall feeling bad necessarily before her visit, but I feel better after seeing her, which is pretty cool...  :)  Hopefully Vicki enjoyed her visit to the ATX at least half as much as I did - then we can call it a success...  ;)  I also hope that someone or something is there to bolster your spirits as the holidays approach.

Unfortunately for you, Vicki will be home by Thursday night, which means that you'll be subjected to another Football Friday post...  ;)  Have a good one and I'll see you then!