Good morning everyone, and a Happy New Year's Eve to you at that.  As I start typing this, I suspect that it will be a pretty lengthy post, although I have no notes to accompany me this time. I already know what you're thinking...  "That garbage that you subject us to endlessly Coach, and you work from notes?..."  Oh, you're so mean my loyal readers, all two of you...  (hey Miletus)  ;) Midnight signaled the start of the 11th of 12 consecutive days off for me, and although I had planned on getting a lot accomplished, the 3 main areas where I made progress were resting/sleeping, eating, and watching 'Breaking Bad.'  I posted the photo of myself below on facebook with the following text:  "Call off the nationwide manhunt...  #walterwhitewannabe #toomuchbreakingbad #noshavevacation  #rareselfie"  Up until a few hours ago, I had never taken the time to figure out how to upload a photo to Twitter from my Droid, so this is currently the only snapshot in my photos/videos section.  It doesn't make me look like a total psychopath, does it?... :D 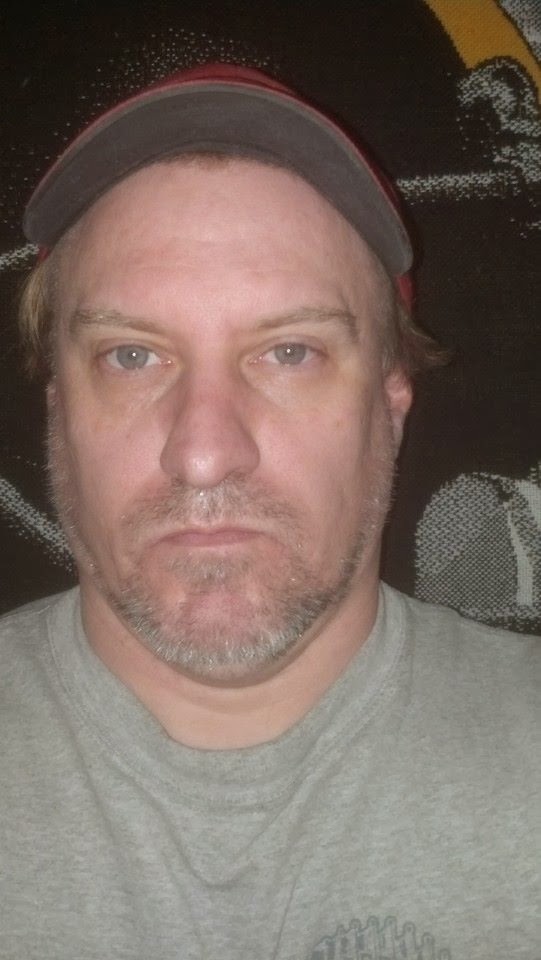 I almost feel like I should post a more upbeat picture of myself after I shave just so people don't freak out...  ;)  I ended up joking with my friend Lightning a few days ago (which later became a facebook status) that Gus Fring would be serving me chicken in my sleep because I was watching so much of the 'Breaking Bad' marathon.  I seriously estimate that I watched at least 90% of the recently concluded 4-day marathon on AMC.  I am not joking when I tell you that I DID go on to have dreams about 'Breaking Bad' while I slept, due to watching the series for four days on end... During commercials I would switch to the college bowl games on ESPN.  In retrospect, I am extremely grateful to AMC for airing the 'Breaking Bad' series from start to finish, because most of the bowl games to this point have not been very close.  I almost certainly would have gotten a lot more accomplished around my apartment had the t.v. been locked on not-really-must-see college football, but that's neither here nor there.  Speaking of college football, the 'Comprehensive Bowl Predictions (2013-2014)' post that I did recently is still there for your viewing pleasure, complete with mine and Joey's score predictions for all 35 bowl games.  This mammoth entry has also been updated with every final score as the bowls have been completed, as well as our overall records picking the games straight up, against the spread, and in regard to the overs/unders.  Joey is a little bit ahead of me at this point (I think it's five games right now)...

Speaking of football (we never talk about football here), my Bikini Hill Bobcats were successful in winning a fantasy championship for me yesterday, defeating Good Dotto 244-154 in the final.  My team showed up yesterday in a big way, so much so that I continued to flip back and forth between the marathon and Eagles/Cowboys game last night, because my fantasy matchup was in hand.  My team scored 153 points yesterday, which as you can see was 1 point shy of matching my opponent's 2-week total.  Here's the scoring breakdown from my starters yesterday...

As I've mentioned here before, it's not possible for me to have an all-around good football weekend, and while my pick in Lucki Duck's contest won yesterday, I was desperately rooting for the San Diego Chargers to lose yesterday so that my Steelers would find themselves in the playoffs.  My friend Grrouchie shared the following flowchart on facebook not too long ago, and at the time, things didn't look very promising... 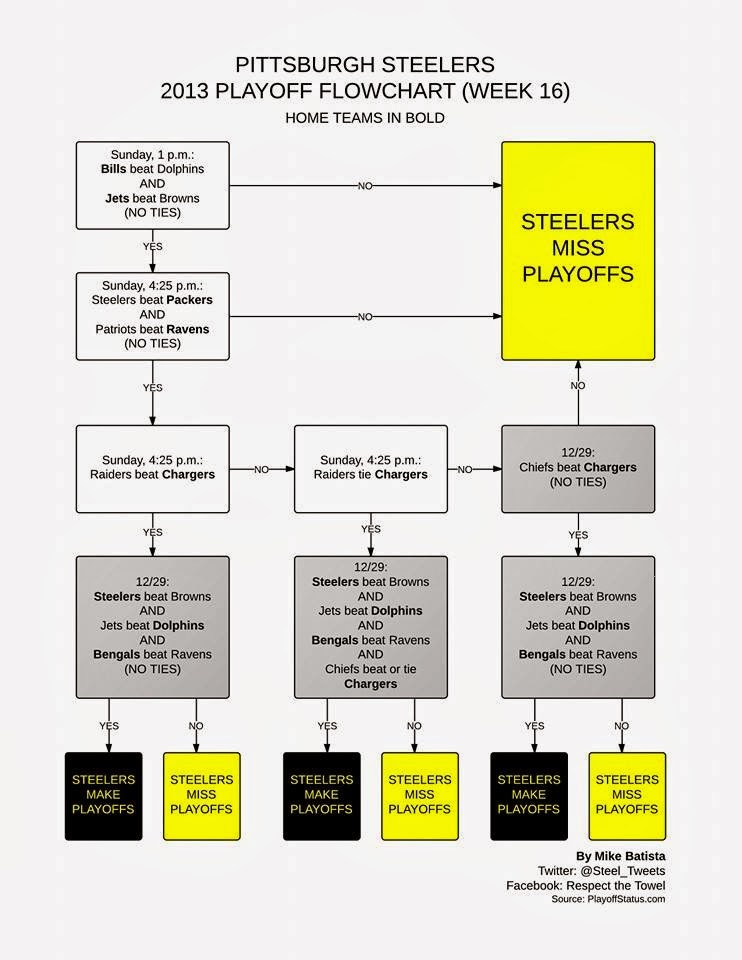 To summarize (now that you've put down your magnifying glasses), basically a lot of things had to go right for the Steelers over the last few weeks of the season for Pittsburgh to nab a playoff spot. Well, the Steelers beat the Browns yesterday, while the Jets were beating the Dolphins, and the Bengals were eliminating the Ravens.  This brings us to the Chiefs/Chargers game in San Diego... Kansas City had nothing to play for, already knowing that they were going to be the fifth-seed in the AFC, regardless of anything that happened yesterday.  With this knowledge, the Chiefs had several of their best players on the inactive list yesterday.  Well, after the early games went the way that they did, meaning that the outcome of the Chiefs/Chargers game would determine if the Chargers or the Steelers advanced on to the playoffs, those players were obviously still on the inactive list.  Personally, I have no problem with the Chiefs doing this.  Kansas City is doing everything in their power to prepare for their playoff run, and the Steelers had MANY opportunities to be better than 8-8.  And at this point, let me express my sincere respect for those players on the Chiefs' roster who did dress out yesterday, because they played well enough to win the game, and should have won.  First, there was the field goal attempt missed by Ryan Succop at the end of regulation.  A 41-yard field goal is very makeable by NFL standards.  Second, it appears that the officials missed an extremely obvious penalty call on the attempt, which would have given the Chiefs 5 yards, and the opportunity for another attempt from 36 yards out (the NFL admitted this oversight yesterday).  The Chargers were lined up illegally on the attempt.  Then, in overtime, as Eric Weddle converted a first down on a fake punt for the Chargers, the Chiefs stripped the ball from him and ran it back for an apparent touchdown.  There were no whistles during the play, but after a conference, the officials ruled that Weddle was down by contact.  Watching the game at home, I wondered if I was the only person in America who thought that the Steelers were robbed on this play, but I wasn't evidently, as I found an article detailing all of the above yesterday at bleacherreport.com/articles/1905266-nfl-officials-miss-two-calls-and-cost-the-pittsburgh-steelers-playoff-spot.  I'm sure that the NFL is very concerned about this...  #sarcasm  #extremesarcasm

Okay, so back to New Year's Eve.  My plan is to travel down to 6th Street tonight, despite the fact that the forecast low is 36 degrees...  My brother made me a kind offer, volunteering to drive me to and from San Antonio for New Year's Eve (since my vehicle isn't starting), but for those of you who are familiar with this part of Texas, that is the equivalent of him driving round-trip from Sea World to the Erwin Center, twice in two days.  I just hate doing that to people, but I appreciated the offer.

As for 2014, I'm just going to do my best to regain my discipline and focus.  I was in such bad shape last fall (dealing with the aftermath of my infamous one-month move to Las Vegas), and then what turned out to be a very trying December sent me into 2013 completely bewildered and dumbfounded.

I wish all of you the very best of luck with your New Year's resolutions, and I implore all of you to ring in 2014 safely.  Have a great day and I'll see you next year...  :)