"And all this could be, such a dream, so it seems, I was never much good at goodbye..."
-Night Ranger- (Goodbye)

"I will remember you, will you remember me, don't let your life pass you by, weep not for the memories..." -Sarah McLachlan- (I Will Remember You)

"It's something unpredictable, but in the end it's right, I hope you had the time of your life..."
-Green Day- (Time Of Your Life)

Good morning everyone.  Let me start off by saying that I wouldn't be able to do this post the justice that it deserves even if I sat here at my keyboard for the next week...  Even though I was only 10 years old at the time, I still vividly remember the move from Virginia to Texas after my dad was transferred from Quantico to Randolph Air Force Base in 1979.  I still remember the TORRENTIAL RAIN that we drove through in Houston as I rode co-pilot with my mom, following and trying not to lose the car that my dad was driving with my brother serving as his co-pilot.  We didn't lose them, but that rain was HEAVY (looking online just now, I learned that the name of the tropical storm responsible for this rain was Claudette - 42 inches of rain recorded in Alvin in a 24-hour period)...  I remember the Motel 6 on Loop 410 in San Antonio where my family lived while we were waiting for base housing on Randolph, and endlessly checking the vending machines for the surprising amount of loose change that I was able to find...  I also remember being thankful that this hotel had a SWIMMING POOL, because it was HOT.  I can tell you that this move took place in late July and early August.  I'm only positive about the time frame because I just looked up when New York Yankees catcher Thurman Munson died in a plane crash (August 2nd, 1979).  I was a huge baseball fan when I was younger and I still remember that happening during our move.  This was in 1979...

Not long after we arrived, my dad found a second job as a bartender in Universal City, at a bar which is located about half a mile off the front gate of Randolph.  My dad retired from the Air Force in 1984, and he just worked his last shift as the manager of the Pawn Pub on WEDNESDAY...  Yes..., Wednesday..., July 3rd, 2013...  On Tuesday while I was driving to U.C. to meet my dad at the Pawn, I realized that he was 34 years old when he was transferred to Randolph, which coincidentally happens to be the number of years that he worked at the Pub - 34 years.  I know, WOW...  I cannot even begin to tell you how many people are going to miss him.  If I had a dollar for every time that someone at the Pawn has come up to me and introduced themself because they found out that I was "Billy's son," or told me how much they thought of him, or bought me a drink because I'm his son, or told me that I look like him (and you have to have sympathy for anyone who looks like me), well, I'd have a lot of dollars...  I heard someone refer to my dad as "the historian" the other day.  My dad's memory is UNCANNY, and his ability to remember names and people makes me completely envious (and is something that I MUST get better at doing).  Like I said, I could sit here for a week and not even put a dent in mentioning the seemingly endless number of friendships that my dad has cultivated over the years, or the lives that he has influenced.  And the stories that I wish I knew...  When I told the story yesterday about Mr. Hollis and my dad being part of the group of 19 golfers in Las Vegas that was out on the course with the winds gusting up to 70 miles an hour, all while the decision to CLOSE McCarran International Airport had been made...  Yeah, I WISH I knew all of the stories...  :)

As I write this, my dad is driving up I-35 North with a full truck, making the trip to Missouri.  To say that things won't be the same here is the understatement of all time...  I'm sure that I speak for everyone who knows him when I say that we're already looking forward to Thanksgiving, which is when Dad's first visit home is supposed to take place.  Of course you have to remember that everything in life in fluid - Sunday, the day of Dad's going away party (and thank you everyone, it was OUTSTANDING), was also the day of his last shift, as was MONDAY, and WEDNESDAY...  :)  Have a safe trip Dad, and we'll see you soon... 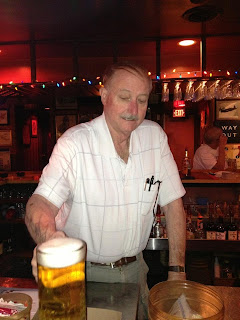