Good evening everyone.  There's so much that I have to put into this entry that we're not even going to have song lyrics (sorry Miletus) or tweets or stolen facebook statuses tonight...  ONE WEEK from today I will be typing up my first football picks of the season for your viewing pleasure.  When I started writing this blog on September 28th just under 2 years ago, one of the primary reasons was to keep track of the success of my football "bets" to help determine whether or not I should move back to Las Vegas.  During each week of the football season, I will be looking at the line (or point-spread) and the over/under for every college and NFL game, and I will publish my ten best bets of the week.  I pick ten because that's the number of bets that I would include on my biggest (number of bets) parlay tickets when I lived in the desert.  I will start with next Saturday's college football games, and I will be making picks up through and including the Super Bowl on February 2nd.  I tend to make all sorts of football predictions, and you can look through last Thursday's entry, '2013 Football Predictions,' if you want to read some of my thoughts on the upcoming season.

Things will be a little different (and a lot better) in the blog during the football season this year.  One change that is going to take place is that I will be predicting a final score for every Texas State Bobcats and Texas Longhorns football game this season.  Due to the fact that I'm a Texas State graduate that has lived more of my life in San Marcos, Texas than in any other one place, coupled with the fact that I'm now living in Austin again in the area known as West Campus (of the University of Texas at Austin), these two schools and cities are of interest to many of the readers of this blog (as you easily figured out if you read the blog description above).  Not only will I be making predictions on the final scores of Bobcats and Longhorns games, but I am also going to utilize the help of ten "celebrity experts" (for each game) during each week of the season.  I have to keep track of and enter all of these predictions, so ten seemed like a reasonable number to cap it at each week (we'll see if I'm right)...  :)  I have just dedicated a page within the blog to the celebrity experts who are successful in predicting the exact final score of the game that they have been chosen to prognosticate.  This page is known as 'Coach's Hall Of Fame," and can be found in the blog entry that I published right before I started typing this post.  I cannot provide prizes to those who are skilled enough to call these games correctly because I just don't have the ability to keep track of all of the people who might want to participate in predicting scores (so it has to be "invite only"), thus the creation of the Hall of Fame, which will remain in existence as long as Google allows and the internet is around...  :D  Your name is print FOREVER (so to speak) in my blog - WHAT could be better?!  ;)

But wait..., there's more...  In addition to everything that I've already summarized, 'Bikini Hill, 6th, & The Strip' is proud to officially welcome the addition of 'Alyssa's Corner' to the blog... 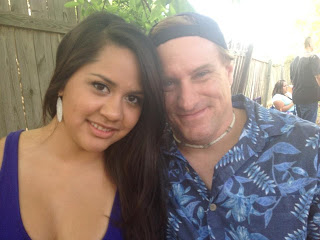 Alyssa (pronounced Uhh lee suhh) is the person pictured above who actually knows something about football, and I'm the 100 year-old man...  This photo was taken at the crawfish boil that I wrote about on April 12th ('Sean And Kate's 7th Annual Crawfish Boil'), and to the delight of people WORLDWIDE, this is the last time that you'll see my picture in the blog for a while (well..., that is..., unless the Houston Texans happen to lose, but we'll get to that in a minute)...  Alyssa will be my partner in the blog this fall, my "sidekick" so to speak...  Not too long ago, I mentioned Alyssa in the blog (which I did several times during the past year when I worked at Harper's in San Marcos - this is the "famous Alyssa" that I've referred to previously, and the one who doesn't know how to peel crawfish, no matter what she tells you)...  :)  Anyway, when I mentioned Alyssa, the views for the blog spiked that day, and I joked that if they did so when I mentioned her again the next day, I might have to give her a spot in this blog.  OF COURSE, the total number of views SPIKED AGAIN, and after thinking about it, I told her that I would like to include 'Alyssa's Corner' in the blog to coincide with the start of the football season.  Alyssa's response was, "Wahoo!  Should have done Alyssa's Corner a long time ago.  I probably told you a billion times..."  (That number is off by about a billion by the way)...  When football (preseason) returned, Alyssa made a comment stating that all was right with the world again, and I knew that I had made a good decision...  ;)  Alyssa has been a lifelong Houston Texans fan (her family has held a pair of season tickets since the inception of the team), and Alyssa and I became friends through football.  This is quote from Alyssa during a discussion about what you'll see beginning next Friday:  "We bonded on football Coach!  And I offered you a cupcake the first time I met you!  Remember that?  It was my birthday cupcakes and they had little Houston Texans rings on them..."  Yes I remember, and YES..., this girl LOVES the Houston Texans...  In honor of Alyssa, the color theme of the blog is 'Houston Texans' right now, and it will be until the college football season begins next weekend.  I told her that the next time the blog will see this color theme is when the Texans win the Super Bowl...  Like myself, Alyssa will be giving you a score prediction for every Texas State (her alma mater also - May 2013) and Texas football game this season.  Additionally, Alyssa will be giving you a score prediction for every Houston Texans game this year.  On top of that, I will also be giving Alyssa 99 (not 100, but 99, because that's J.J. Watt's jersey number) words of this blog space each week to use however she pleases (heaven help us, and within Google's guidelines of course)...  :)  I have absolute confidence in the fact that Alyssa will add something to the blog, will do a better job of predicting football games than me, and will ultimately completely take over the blog altogether...  ;)

Starting next week, and continuing every Friday after a Texans win, there will be a happy Texans photo leading into Alyssa's Corner, like this one (or another shot of her choosing): 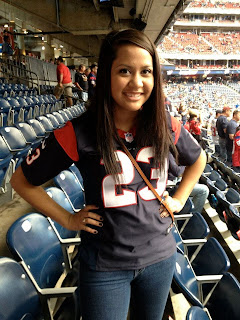 During any week following a Texans loss, you will see the picture shown below: 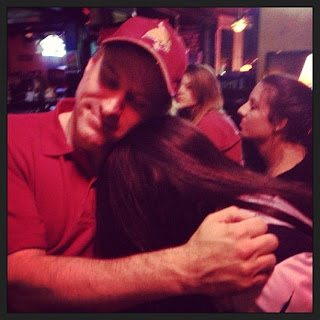 Luckily for Alyssa (and blog readers everywhere), the Texans will probably win at least twelve games during the regular season...  I hope that you're as excited about the upcoming football season as we are, and we look forward to seeing you on Fridays during the fall.  Have a great weekend and I'll see you again on Monday!